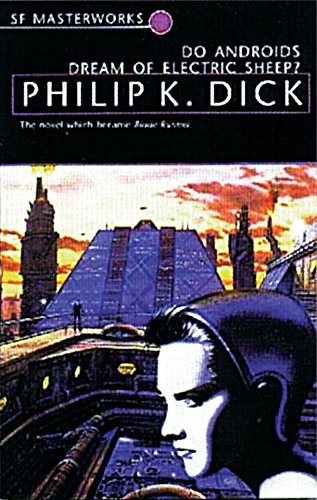 World War Terminus had left the Earth devastated. Through its ruins, bounty hunter Rick Deckard stalked, in search of the renegade replicants who were his prey. When he wasnżt żretiringż them with his laser weapon, he dreamed of owning a live animal -- the ultimate status symbol in a world all but bereft of animal life. Then Rick got his chance: the assignment to kill six Nexus-6 targets, for a huge reward. But in Deckardżs world things were never that simple, and his assignment quickly turned into a nightmare kaleidoscope of subterfuge and deceit -- and the threat of death for the hunter rather than the hunted...

Do Androids Dream of Electric Sheep? is a book that most people think they remember, and almost always get more or less wrong. Ridley Scott's film Blade Runner took a lot from it, and threw a lot away; wonderful in itself, it is a flash thriller where Dick's novel is a sober meditation. As we all know, bounty hunter Rick Deckard is stalking a group of androids returned from space with short life spans and murder on their minds--where Scott's Deckard was Harrison Ford, Dick's is a financially over-stretched municipal employee with bills to pay and a depressed wife. In a world where most animals have died, and pet-keeping is a social duty, he can only afford a robot imitation, unless he gets a big financial break. The genetically warped "chickenhead" John Isidore has visions of a tomb-world where entropy has finally won. And everyone plugs in to the spiritual agony of Mercer, whose sufferings for the sins of humanity are broadcast several times a day. Prefiguring the religious obsessions of Dick's last novels, this asks dark questions about identity and altruism. After all, is it right to kill the killers just because Mercer says so? --Roz Kaveney

One of the most original practitioners writing any kind of fiction, Dick made most of the European avant-garde seem like navel-gazers in a cul-de-sac (Sunday Times)

For everyone lost in the endlessly multiplicating realities of the modern world, remember: Philip K. Dick got there first (Terry Gilliam)