Items related to The Copper Beech 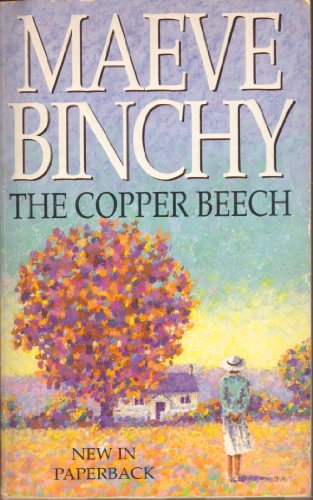 By the school house at Shancarrig stands a copper beech, its bark scarred with the names and dreams of the pupils who have grown up under its branches.

Under Junior Assistant Mistress Maddy Ross's careful gaze the children play, but out of school Maddy's gaze lingers where it shouldn't. Maura Brennan, a bundle of fun from the rough end of town, plays with her pals: leap year baby Eddie Barton, the apple of his mother's eye, and Nessa Ryan, who little realises as she carves his name at the roots of the copper beech on the very last day of school that she'll get a lot more from one of her schoolmates than her first shy kiss.

The copper beech is the gateway to Maeve Binchy's marvellous portrait of a small Irish town whose untroubled surface conceals the passions, rivalries, friendships, ambitions and jealousies beneath.

You want to read Maeve Binchy's books as fast as she seems to have written them. This one fairly gallops along because her apparently spontaneous and casual manner covers masterly plotting ... It is all very satisfactory (INDEPENDENT)

An old copper beech overlooks a school, and witnesses all the hopes and loves, dreams and ambitions of the children who grew up there...

Book Description Paperback. Condition: New. 2003 Crease in two pages. Quality Books. Because We Care - Shipped from Canada. Usually ships within 1-2 business days. If you buy this book from us, we will donate a book to a local school. We donate 10,000+ books to local schools every year. If there are any problems, pleases ask us to resolve it amicably before leaving any feedback. Seller Inventory # R22629S

Book Description Condition: New. In the Irish town of Schancarrig, the young people carve their initials-and those of their loves?" into the copper beech tree in front of the schoolhouse. But not even Father Gunn, the parish priest, who knows most of what goes on behind Shancarrig's closed doors, or Dr. Jims, the village doctor, who knows all the rest, realizes that not everything in the placid village is what it seems. Unexpected passions and fear are bringing together the lives of so many, such as the sensitive new priest and Miss Ross, the slight, beautiful schoolteacher. Leonora, the privileged daughter of the town's richest family and Foxy Dunne, whose father did time in jail.and Nessa Ryan, whose parents run Ryan's Hotel, and two very different young men. For now the secrets in Shancarrig's shadows are starting to be revealed, from innocent vanities and hidden loves to crimes of the heart.and even to murder. Seller Inventory # 9781857979992