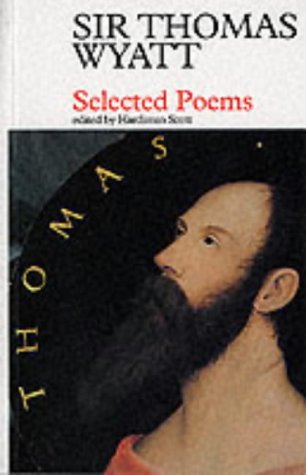 Sir Thomas Wyatt (1503-1542) remains one of the most popular writer's of Henry VIII's court, and the most romantic, given his entanglement with Anne Boleyn, which resulted - legend has it - in passionate and vulnerable poems. This book contains a representative selection of his works. Hardiman Scott sees Wyatt as a modern poet before his time and demonstrates the impact he had on the development of English poetry. Wyatt introduced the sonnet, terza rima and other Italian verse forms into English and invented forms and processes of his own.

Book Description Fyfield Books, 1996. Paperback. Condition: Used; Good. **SHIPPED FROM UK** We believe you will be completely satisfied with our quick and reliable service. All orders are dispatched as swiftly as possible! Buy with confidence!. Seller Inventory # 2130800

Book Description Fyfield Books, 1996. Paperback. Condition: Very Good. WE ARE PROCESSING ORDERS AS NORMAL DURING THIS VIRUS EPIDEMIC, ALL ITEMS ARE SENT BY ROYAL MAIL. DISPATCHED FROM THE UK WITHIN 24 HOURS ( BOOKS ORDERED OVER THE WEEKEND DISPATCHED ON MONDAY) BY ROYAL MAIL. ALL OVERSEAS ORDERS SENT BY AIR MAIL. WE ALSO ACCEPT PAYMENT IN US DOLLARS OR EURO BY BANK TRANSFER. Seller Inventory # mon0000688287

Book Description Paperback. Condition: Very Good. The book has been read, but is in excellent condition. Pages are intact and not marred by notes or highlighting. The spine remains undamaged. Seller Inventory # GOR003628494

Book Description Manchester, Publishers: Fyfield, 1996., 1996. 8°. 96 Pages. Publishers: Fyfield (1996). 96 Pages. Original Flexible Boards. Ex-Library-Copy. Library-Button on the Spine. Library-Stamp [dropped out] on Title. Red Feltpen-Markings on the Cutting. No Markings in the Text! No Underlinings! No Owner-Notation! Cover only with small Signs of Usage!. Seller Inventory # 23395BB

Book Description Manchester: Fyfield Books, 1996. 1st edition. "Sir Thomas Wyatt (1503-1542), 'the first great English lyric poet', remains one of the most popular writers of Henry VIII's court, and the most romantic, given his entanglement with Anne Boleyn, which resulted - legend says - in some of his most passionate and vulnerable poems." Pp.96, signed by Hardiman Scott to title page. Pbk. VG. Seller Inventory # 36410