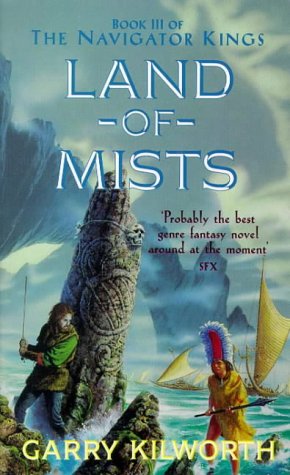 It was always Kieto's destiny to lead the Polynesian armies against the Celts and the Picts of the Land-of-Mists. And now the time has come. The warriors are assembled, the boats are ready, and the gods are preparing for the confrontation.

Only Seumas, the Celtic warrior taken from his homeland years before, speaks out against the great adventure. But Seumas is an old man now, embittered by the loss of his beloved wife, Dorcha. Not even the love of his son, Craig, can console him.

Soon the mighty army is on the move, crossing the sea towards the unknown land, and Seumas and Craig swell its numbers. They encounter storms, magic, monsters and tragedy even before they reach their destination - the cold, rainy land of muted colours that will decide their fate - and that of their gods.

Probably the best genre fantasy novel around at the moment... unique and masterful... a beautiful ending to an excellent saga. (SFX)

The writing of The Navigator Kings
The Navigator Kings trilogy was an enormous project for me, begun in 1974 when I first found an article on Polynesian navigation in the National Geographic. Since then I have been gathering material - books on the myths and legends of the Polynesians - and have twice spent some time on the Pacific Islands speaking with local historians and storytellers. I took all this material and wound it in and out of my own fantasy, using Homer's epics as a structural template. By replacing New Zealand with Britain I was able to create a clash of cultures - the Polynesians and the Celts - and thereby highlight the differences and the similarities between them. I always find it interesting to bring two disparate cultures together to see what will happen. It's as much an adventure for me as it is for any reader.

Book Description Orbit. Paperback. Condition: Good. A copy that has been read, but remains in clean condition. All pages are intact, and the cover is intact. The spine may show signs of wear. Pages can include limited notes and highlighting, and the copy can include previous owner inscriptions. An ex-library book and may have standard library stamps and/or stickers. At ThriftBooks, our motto is: Read More, Spend Less. Seller Inventory # G1857237625I3N10

Book Description Orbit 14/01/1999, 1999. Condition: Very Good. This book is in very good condition and will be shipped within 24 hours of ordering. The cover may have some limited signs of wear but the pages are clean, intact and the spine remains undamaged. This book has clearly been well maintained and looked after thus far. Money back guarantee if you are not satisfied. See all our books here, order more than 1 book and get discounted shipping. . Seller Inventory # 7719-9781857237627

Book Description Orbit, 1999. Paperback. Condition: Good. Ex-Library Book. Has usual library markings and stamps inside. All orders are dispatched the following working day from our UK warehouse. Established in 2004, we have over 500,000 books in stock. No quibble refund if not completely satisfied. Seller Inventory # mon0003802312