Items related to Against/Beyond The Fall Of Night

Against/Beyond The Fall Of Night 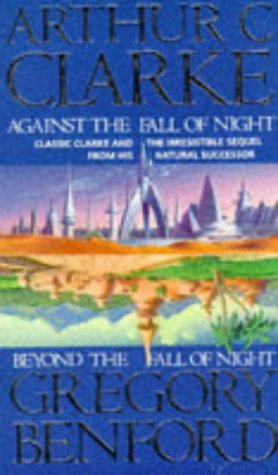 AGAINST THE FALL OF NIGHT is one of Arthur C. Clarke's earliest extended works of fiction. It tells the story of a young man, Alvin, the only child to be born in the enclosed city of Diaspar for many centuries.

Dissatisfied with the stasis of Utopian life in the city, Alvin discovers that Diaspar is not, as its inhabitants believe, the only city left on an Earth turned to desert. There is another city, Lys, whose people have remained close to nature. For Alvin, this discovery is the first step in a journey that will take him to the stars - and to the truth about the universe.

In Benford's sequel Alvin's discoveries have led to an renaissance; man is reclaiming the Earth. But along with creativity, evil has returned to the Earth.

Look out for more information on this book and others on the Orbit website at www.orbitbooks.co.uk

Arthur C. Clarke is awesomely informed about physics and astronomy, and blessed with one of the most astounding imaginations ever encountered in print (NEW YORK TIMES)

For many readers Arthur C. Clarke is the very personification of science fiction (THE ENCYCLOPEDIA OF SCIENCE FICTION)

Arthur C. Clarke is one of the truly prophetic figures of the space age ... The colossus of science fiction (NEW YORKER)

Against the Fall of Night

Against the Fall of Night Clarke, Arthur C. and Benford, Gregory