Items related to Pythagoras’ Trousers: God, Physics and the Gender... 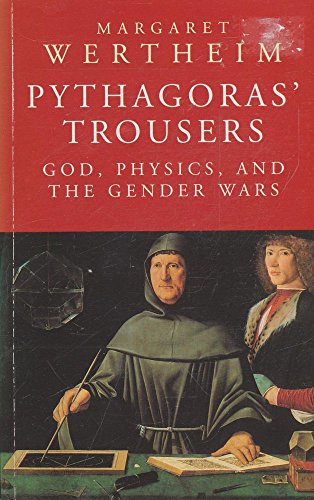 Why have men dominated science from the Ancient Greeks to the present day? In this searing work of revisionist feminist history, Margaret Wertheim finds the answer where God and physics meet.

In this fascinating synthesis of science, religion and gender politics Wertheim demonstrates that, from its inception, physics has been an overwhelmingly male-dominated activity and continues to be so today. She puts forward the startling hypothesis that gender inequity in physics is a result of the religious origins of the enterprise. Physics, she reveals, is a science based on a conception of God as a divine mathematical creator. And in line with Christian institutions it has historically been closed to women.

’A rare and welcome mix in science writing, combining impressively detailed historical knowledge with delightful readability and fuelling it all with that rarest of ingredients in this genre, a deeply felt moral and feminist passion. On Wertheim’s guided and immensely accessible tour through the centuries-long development of physics, we learn how science, far from displacing the all-male priesthood, emulated it – and consequently how the physics lab became another Vatican with a no-girls-allowed sign on its door.’ Susan Faludi, author of Backlash

297 pages. Book appears to have hardly been read and is in As new condition throughout.

Fascinating. . . . A delight to read, and highly informative.--Keith Devlin

Smart, bold, and provocative. . . . Sure to evoke even more interest than it does controversy.--Evelyn Fox Keller, professor, Massachusetts Institute of Technology, author of Reflections on Gender and Science

[An] immensely accessible tour. . . . How the physics lab became another Vatican with a no-girls-allowed sign on its door.--Susan Faludi, author of Backlash

Book Description Condition: Good. Ships from the UK. Former Library book. Shows some signs of wear, and may have some markings on the inside. Seller Inventory # 18282698-20

Book Description Fourth Estate, London, 1997. Paper Back. Condition: Very Good. The cover has minor wear, scuffing around the edges and a back corner with multiple creases. The edges of the book have light tanning and a few spots. The page margins have minor spotting. 297 pages. Books listed here are not stored at the shop. Please contact us if you want to pick up a book from Newtown. Size: Size D: 7"- 8" Tall (178mm- 202mm). Seller Inventory # 140435

Book Description Paperback. Condition: Very Good. The book has been read, but is in excellent condition. Pages are intact and not marred by notes or highlighting. The spine remains undamaged. Seller Inventory # GOR005660871

Book Description Paperback. Condition: Good. The book has been read but remains in clean condition. All pages are intact and the cover is intact. Some minor wear to the spine. Seller Inventory # GOR007265124