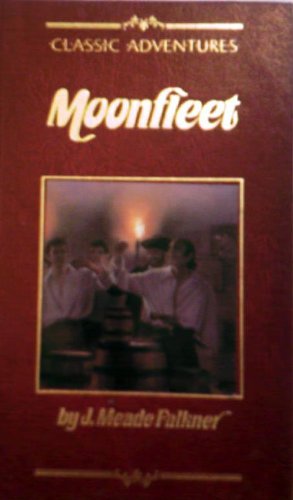 Tim Piggot-Smith reads J. Meade Falkner's exciting tale of a boy who gets caught up in a dangerous adventure with smugglers and treasure. Orphaned John Trenchard is just 15 when his adventures begin...Growing up by the sea in the village of Moonfleet, John is captivated by the local legend of the ghostly Blackbeard, who rises on winter nights to search for his lost treasure. However, by accidentally discovering a secret passage under the churchyard, John stumbles on the true secret of the village: smuggling. Little does he know that becoming involved in the illegal trade leads to him being accused of murder - with a reward for his capture. He is forced to leave home and goes on the run. Will he be able to clear his name? And can he finally track down Blackbeard's treasure?

Moonfleet (1898) is both a mystery and an adventure story, a tale of smuggling set among the cliffs, caves, and downs of Dorset. The mystery is in the outcome of the conflict between the smugglers and the revenue men, the adventure in how the hero, John Trenchard, discovers the secret of Colo.

Book Description Paperback. Condition: Good. All orders are dispatched the following working day from our UK warehouse. Established in 2004, we have over 500,000 books in stock. No quibble refund if not completely satisfied. Seller Inventory # mon0005758783

Book Description Condition: Very Good. Shipped within 24 hours from our UK warehouse. Clean, undamaged book with no damage to pages and minimal wear to the cover. Spine still tight, in very good condition. Remember if you are not happy, you are covered by our 100% money back guarantee. Seller Inventory # 6545-9781855873162

Book Description Paperback. Condition: Very Good. Moonfleet (Classic adventures) This book is in very good condition and will be shipped within 24 hours of ordering. The cover may have some limited signs of wear but the pages are clean, intact and the spine remains undamaged. This book has clearly been well maintained and looked after thus far. Money back guarantee if you are not satisfied. See all our books here, order more than 1 book and get discounted shipping. Seller Inventory # 7719-9781855873162

Book Description Condition: Good. This is an ex-library book and may have the usual library/used-book markings inside.This book has hardback covers. In good all round condition. No dust jacket. Please note the Image in this listing is a stock photo and may not match the covers of the actual item,350grams, ISBN:1855873168. Seller Inventory # 7407227

Book Description Paperback. Condition: Good. The book has been read but remains in clean condition. All pages are intact and the cover is intact. Some minor wear to the spine. Seller Inventory # GOR004442027

Book Description Paperback. Condition: Very Good. The book has been read, but is in excellent condition. Pages are intact and not marred by notes or highlighting. The spine remains undamaged. Seller Inventory # GOR004434552

Book Description Paperback. Moonfleet is a tale of smuggling royal treasure and shipwreck first published in 1898. The book was extremely popular among children worldwide up until the 1970s, mostly for its themes of adventure and gripping storyline. It remains a popular story widely read and is still sometimes studied in schools. The year is 1757; the place is Moonfleet, a small village near the sea in the south of England. It gets its name from a formerly prominent local family, the Mohunes. Village legend tells of the notorious Colonel John "Blackbeard" Mohune who is buried in the family crypt under the church. He is reputed to have stolen a diamond from King Charles I and hidden it. His ghost wanders at night looking for it and the mysterious lights in the churchyard are attributed to his activities. 1991. A near fine copy only marked by light browning to the edge of the text block. Seller Inventory # 5985633