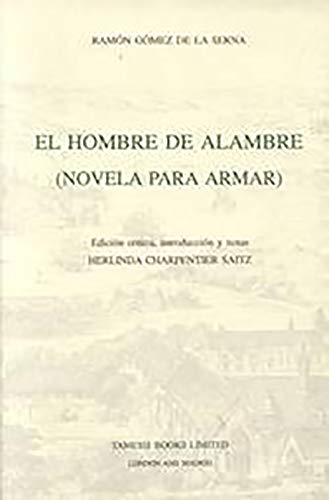 Professor Charpentier Saitz's edition of El Hombre de alambre, a hitherto unpublished novel by Ramón Gómez de la Serna, is based on the notes and fragments of the work preserved in the Special Collections section of the Hillman Library, University of Pittsburgh. The introduction describes the state of the manuscript and indicates the difficulties posed by the material: the barely decipherable handwriting of the author, and the arbitrary numbering of the notes and fragments, which appears to be by another hand. The edition presents the notes and fragments organized in the form of the novella structure which Ramón Gómez de la Serna used in his short narratives.
The central character is a lonely emigrant, who, old and disillusioned, metaphorically transforms his essential being into wires in order to make himself immune to sorrow. As death approaches, he begins an interior dialogue in which he finds the meaning of life and reconciles himself both to himself and to the idea of death, finally dying in a state of peace. The edition also presents the transcription of the notes and fragments in the original order and pagination, respecting Ramón's erasures and deletions.
HERLINDA CHARPENTIER SAITZis Associate Professor in the Department of Languages at the University of Massachusetts at Lowell.