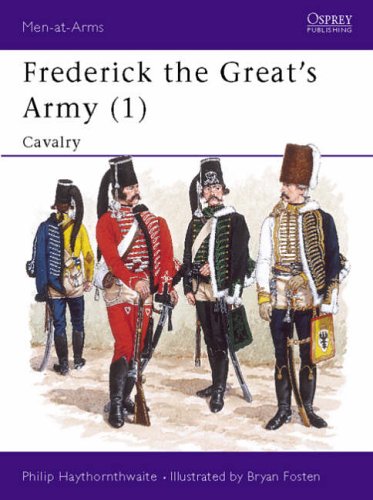 The Prussian army of King Frederick II, 'the Great', became so renowned as a result of its campaigns, principally during the Seven Years' War, that it was regarded as a model for many of the other armies of Europe. In this first of two volumes exploring Frederick the Great's splendid army, Philip Haythornwaite examines the organisatin, tactics and uniform of his cavalry troops, in a text backed by numerous illustrations including eight full page colour plates by Bryan Fosten.

Philip Haythornthwaite is an author and historical consultant specialising in the military history, uniforms and equipment of the 18th and 19th centuries. His main area of research covers the Napoleonic Wars. He has written some forty books, including more than 20 Osprey titles, and innumerable articles and papers on military history, but still finds time to indulge in his other great passion: cricket. Bryan Fosten was born in 1928, the son of a Master Military Embroiderer and a Court Embroidress. He served in the army in Egypt and Palestine and returned to follow the printing trade. Since 1973 he has devoted himself to military research and illustration. He is the founding editor of the innovative magazine Tradition and has written and illustrated many books, often in collaboration with his late brother, Donald Fosten.

The first of a three-part series on the Prussian Army which fought the Seven Years' War, this is an examination of the cavalry arm of Frederick the Great's army.