Items related to The Eyes of the Skin: Architecture and the Senses (Polemics)

Pallasmaa, Juhani The Eyes of the Skin: Architecture and the Senses (Polemics)

The Eyes of the Skin: Architecture and the Senses (Polemics) 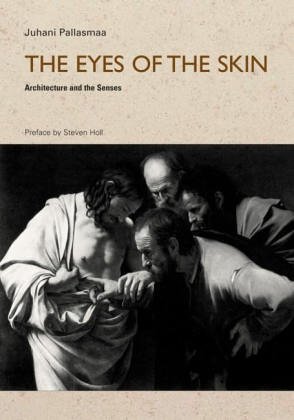 The much admired Finish thinker presents his polemical statement on the situation facing Modern architecture today. Fresh from his success from the animal exhibition, where he explores the relationships between animals and their environments, he uses this opportunity to vent thoughts which are the result of many years of careful observation and influence. Discussing the overriding visual image of modern architecture he explores the effects of this dominating style over other contemporary styles.

Architecture has the capacity to be inspiring, engaging and life–enhancing. But why is it that architectural schemes which look good on the drawing board or the computer screen can be so disappointing ‘in the flesh’?

The answer, argues Juhani Pallasmaa, lies in the dominance of the visual realm in today’s technological and consumer culture, which has pervaded architectural practice and education. Whilst our experience of the world is formulated by a combination of five senses, much architecture is produced under consideration of only one – sight. The suppression of the other sensory realms has led to an impoverishment of our environment, causing a feeling of detachment and alienation.

First published in 1996, The Eyes of the Skin has become a classic of architectural theory and is required reading on courses in schools of architecture around the world. It consists of two extended essays. The first surveys the historical development of the ocularcentric paradigm in western culture since the Greeks, and its impact on the experience of the world and the nature of architecture. The second examines the role of the other senses in authentic architectural experiences, and points the way towards a multi–sensory architecture which facilitates a sense of belonging and integration.

Since the book’s first publication, interest in the role of the body and the senses has been emerging in both architectural philosophy and teaching. This new, revised and extended edition of this seminal work will not only inspire architects and students to design more holistic architecture, but will enrich the general reader’s perception of the world around them.

‘Not since the Danish architect Steen Eiler Rasmussen’s Experiencing Architecture (1959) has there been such a succinct and clear text which could serve students and architects at this critical time in the development of 21st–century architecture.’ Steven Holl

This volume presents the author's polemical statement on the situation facing modern architecture today. Pallasmaa uses this opportunity to discuss the overriding visual image of modern architecture. He explores the effects of this dominating style over other contemporary styles.

1. The Eyes of the Skin: Architecture of the Senses

Book Description Wiley 1996-04-11, 1996. Paperback. Condition: Good. Item is in good condition. Some moderate creases and wear. This item may not come with CDs or additional parts including access codes for textbooks. Might be an ex-library copy and contain writing/highlighting. Seller Inventory # DS-1854904396-3

2. The Eyes of the Skin: Architecture and the Senses (Polemics)

Book Description Wiley, 1996. Condition: Good. A+ Customer service! Satisfaction Guaranteed! Book is in Used-Good condition. Pages and cover are clean and intact. Used items may not include supplementary materials such as CDs or access codes. May show signs of minor shelf wear and contain limited notes and highlighting. Seller Inventory # 1854904396-2-4