Items related to A History of the Peninsular War: September 1809-December... 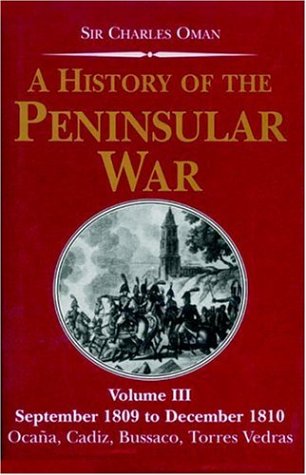 The 1807-1814 war in the Iberian Peninsula was one of the most significant and influential campaigns of the Napoleonic Wars. Arising from Napoleon's strategic necessity to impose his rule over Portugal andSpain, it evolved into a constant drain on his resources. Sir Charles Oman's seven volume history of the campaign is an unrivalled and essential work. His extensive use and analysis of French, Spanish, Portuguese and British participants' accounts and archival material, together with his own inspection of the battlefields, provides a comprehensive and balanced account of this most important episode in Napoleonic military history. Volume III covers the period from September 1809 to December 1810, when the French were consolidating their hold on Spain, crushing resistance and attempting to drive the British out of Portugal. However, they could not wholly defeat their opponents. The forces of the Spanish Regency Council, with British and Portuguese aid, held out against the siege of Cadiz. Wellington's Allied army fought a model defensive battle at Bussaco, stalling the French drive into Portugal and enabling the British and Portuguese forces to retire to the shelter of the Torres Vedras fortifications. Here the Allies' defence led to a strategic victory, blunting the French offensive, and ultimately forcing the French to abandon their invasion