Items related to Fighting in Normandy: German Army from D-day to Villers-boca... 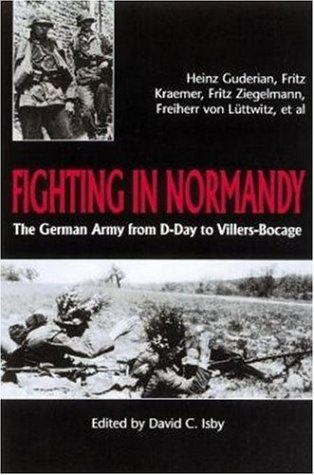 The Allied landings on the Normandy beaches in June 1944 were brilliantly executed but proved to be just the opening phase of a desperately-fought campaign. The German Army responded to the invasion with as much ferocity and force as it could muster, showed tenacity and determination and turned the struggle for Normandy into a brutal and prolonged campaign. This important compilation of in-depth accounts by German commanders given the task of turning the tables on the invaders is crucial to a full understanding of the battle for Normandy. The accounts David Isby has selected, all written soon after the war's close for American military intelligence, cover German attempts to stem the invasion, dramatic defensive battles in the Norman countryside and attempts to implement a series of counterattacks. This vital source material presents the German perspective on the fighting, from regimental to corps level, and graphically illustrates the wealth of problems faced by an army on the very brink of destruction.

David C. Isby edited Fighting the Invasion: The German Army at D-Day and The Luftwaffe Fighter Force. He lives in Arlington, VA.

1. Fighting In Normandy: The German Army from D-Day to Villers-Bocage

2. Fighting In Normandy: The German Army from D-Day to Villers-Bocage

3. Fighting In Normandy: The German Army from D-Day to Villers-Bocage David Isby