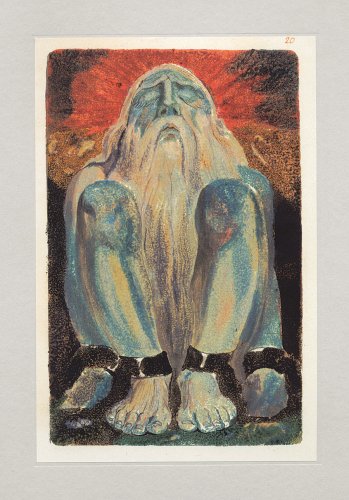 William Blake (1757-1827) was unusually aware of the horrors
of slavery, which he knew about in detail from a book he illustrated. But
slavery was to him not only a physical system but a mental state of
restricted perception that he called 'mind-forg'd manacles'. Mental
enslavement and its opposite, freedom, gave rise to his most dramatic and
complex text and images.

With over 60 vivid reproductions from Blake's illuminated books,
watercolours and engravings in the British Museum, this volumes includes an
essay by the curator, leading Blake scholar David Bindman on the theme of
slavery in Blake's visual imagery, and another by novelist and literary
critic Darryl Pinckney on Olaudah Equiano, an African former slave who
campaigned for the abolition of
slavery in Blake's time. This book commemorates both the 200th anniversary
of the abolition of the slave trade in Britain, and the 250th anniversary
of Blake's birth.

David Bindman has recently retired from a Professorship in the History of Art at University College London. He has specialised mainly in British art, and has written extensively on William Blake, including Blake as an Artist, 1977, and on Hogarth, and has made studies of eighteenth-century sculpture and caricature. He was responsible for the exhibition The Shadow of the Guillotine: the British response to the French Revolution at the British Museum in 1989, and Serious Comedy: Hogarth and his Times, also at the British Museum in 1997. In recent years he has worked on issues of race and representation in Ape to Apollo: aesthetics and the idea of race, 1700-1800, 2002, and is currently editing the remaining three volumes of the series The Image of the Black in Western Art, for the Du Bois Institute at Harvard University. Darryl Pinckney is the author of a novel, High Cotton, 1992, and Out There: Mavericks of Black Literature, 2002, in Harvard's Alain Locke Lecture series. He is a visiting professor at Skidmore College, New York, where he teaches in the English and History departments. A long-time contributor to The New York Review of Books, he is currently completing a collection, Sold and Gone: Essays on African American Literature in the Twentieth Century.

For William Blake (1757-1827), the idea of slavery was fundamental to his art and writing. He was fervently opposed to slavery and bitterly contemptuous of the forces in Britain that tried to prolong it. But for Blake slavery was also a mental state. To have limited perceptions, to pursue materialistic ends, to set oneself above others, to follow conventional religion or science was to be enslaved and to be held with 'mind-forg'd manacles' of one's own making. In Blake's art, many of his most dramatic and complex images show a confrontation between the forces of repression and those seeking freedom. With over 60 vivid reproductions from Blake's illuminated books, watercolours and engravings, "Mind-forg'd Manacles" includes an essay by curator and leading Blake scholar David Bindman. Bindman examines the following themes in Blake's poetry and visual art: the cruelties of slavery; The Little Black Boy and other black boys; slavery as restricted vision; chaining desire; and, throwing off the chains.

A second essay by writer Darryl Pinckney explores blacks and literacy, ownership of the word, and the written language as proof of one's humanity, with a focus on eighteenth century black writers such as Sancho, Wheatley, Equiano.

Book Description Hayward Gallery Publishing, 2007. Soft cover. Condition: New. The English poet and artist William Blake (1757-1827) was uncommonly aware of the evils of slavery in his time, having illustrated Narrative of a Five Year's Expedition against the Revolted Negroes of Surinam (1791), John Stedman's firsthand account of the brutal suppression of a slave revolt in South America. But for Blake, the interest was not only in physical but mental enslavement. The ubiquity of "mind-forg'd manacles" (as he put it in his great poem "London") in a rapidly industrializing Europe compelled some of his most dramatic and complex text and images. With over 60 color reproductions from Blake's illuminated books, watercolors and engravings, all from the collection of The British Museum, William Blake and Slavery: Mind-forg'd Manacles presents a strong statement on this great artist's pungent and independent political vision. It includes an essay on the theme of slavery in Blake's visual imagery by the exhibition curator and leading Blake scholar David Bindman, as well as a text on Olaudah Equiano, an African ex-slave who campaigned for the abolition of slavery, by the novelist and literary critic Darryl Pinckney. This book commemorates both the bicentennial anniversary of the abolition of the slave trade in the British Empire, and the two-hundred-and-fiftieth anniversary of Blake's birth. Seller Inventory # ABE-1577492275375