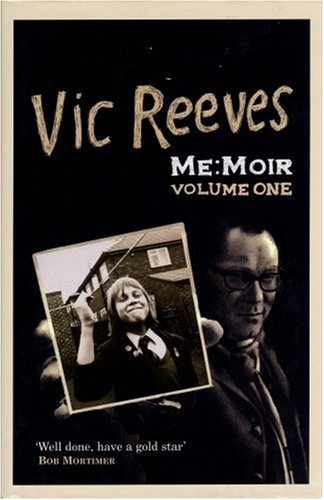 I was eight pounds when I was born, healthy and of good cheer, yet the midwife suggested that it might be a good idea for Mum to feed me on Complan, the weight-gaining food supplement. This she did, and I ballooned to a frightening ten stone by the age of three months. I became so corpulent so quickly that my mother was unable to pluck me from my cot and I was eventually prised out with an oar. To remedy the situation, a skip was later rented to accommodate my ever-increasing mass...Vic Reeves' vivid, enchanting, and utterly hilarious childhood memoir is a comic masterpiece and a stunning melange of whimsical reminisceneces and imaginative reconstruction. Before there was Vic Reeves, there was a boy called James Moir, who was much the same as any other young lad. Obsessed with owning a pet crow, a master at writing his name and terrified of his father's immense moustaches, Jim begins his journey to adulthood in Yorkshire before being deposited in County Durham with an accent that not even the headmaster can avoid laughing at. Though he soon brings jollity to classrooms with his worm 'puppet', Jim also contracts a serious illness that he prefers to call consumption, though the doctors insist on referring to it as TB. Whether trying to escape the attentions of the infamous 'Randy Mandy', or getting a crash course in the tricky art of pag castration, the adolescent tribulations of the boy who would be Reeves are at once instantly familiar and compellingly strange. Well, do you know anyone else who counts chance encounters with both Jii Hendrix and the Yorkshire Ripper among their personal rites of passsage?

Enter the hilarious world of the boy who would be Reeves