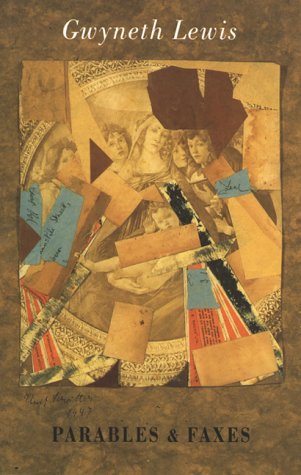 Parables & Faxes was Gwyneth Lewis's long-awaited first collection of poetry in English, a striking and ambitious debut, 'simply a masterpiece', according to Peter Porter. `Outrageously imaginative, witty, and musical,' wrote Gillian Clarke. 'The poems are funny and bold, surreal and beautiful... A daringly fresh voice that Welsh writing desperately needs.'

Gwyneth Lewis has so many of the gifts required for good poetry: command of form, with improvisation enlivening tradition; supple rhythm; originality of subject matter and the right eye to pin down detail; humour, both sardonic and direct; and, above all, commitment to human feeling. Her Welsh/English pendulum swings warmly across worlds as separate as the rural communities of Wales and the academic palisades of Britain and America. The extended title sequence is the most humane and mysterious succession of poems I have read for many years. It is simply a masterpiece. In short, Gwyneth Lewis amounts to a "New Generation" just by herself. -- Peter Porter Felicitous, urbane, heartbreaking, the poems of Gwyneth Lewis form a universe whose planets use language for oxygen and thus are inhabitable. -- Joseph Brodsky

Gwyneth Lewis was Wales's National Poet from 2005 to 2006, the first writer to be given the Welsh laureateship. Her first six books of poetry in Welsh and English were followed by Chaotic Angels (2005) from Bloodaxe, which brings together the poems from her English collections, Parables & Faxes, Zero Gravity and Keeping Mum, and by A Hospital Odyssey (2010), and Sparrow Tree (2011), winner of the Roland Mathias Poetry Award (Wales Book of the Year) in 2012. Her other books include Sunbathing in the Rain: A Cheerful Book about Depression (Flamingo, 2002) and Two in a Boat: A Marital Voyage (Fourth Estate, 2005) and The Meat Tree: new stories from the Mabinogion (Seren, 2010). Her Welsh collection, Y Llofrudd Iaith (Barddas, 2000), won the Welsh Arts Council Book of the Year Prize, and her English collection, Keeping Mum was shortlisted for the same prize. Both Zero Gravity and Keeping Mum were Poetry Book Society Recommendations. Gwyneth Lewis composed the words on the front of the Wales Millennium Centre in Cardiff, opened in 2004. In 2014 she dramatised her book-length poem A Hospital Odyssey for the BBC, broadcast on Radio 4's Afternoon Drama, and delivered her Newcastle/Bloodaxe Poetry Lectures, published in Quantum Poetics (Bloodaxe Books, 2015). She lives in Cardiff.