Items related to Men of Men / Shout at the Devil / The Diamond Hunters...

Smith, Wilbur. Men of Men / Shout at the Devil / The Diamond Hunters (3-in-1 volume) 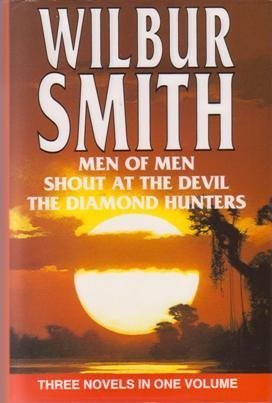 Men of Men: A thriller set in the age of empire, battle and conquest, about a man whose dream begins in the danger and drudgery of the diamond pits and ends on the rich grasslands of Matabeleland, but not before a king and proud warrior nation have paid the price of history...........Shout at the Devil: They were the most unlikely alliance East Africa had ever seen: O'Flynn and Oldsmith, the legendary gin-swilling elephant poacher and the overgrown schoolboy. Together they braved the terrors of savage Mozambique to make a private paradise, fighting only for family and fortune in the days before World War I. But when Germany's shadow fell across the dark continent, O'Flynn and Oldsmith set their sights on new prey -- the black boots and warships of the Kaiser............The Diamond Hunters: When the Van Der Byl Diamond Company is willed by its founder to his son Benedict, it turns out to be a bequest of hatred.

1. Men Of Men; Shout At The Devil; The Diamond Hunters [Three Novels In One]