Items related to Fabergé in London 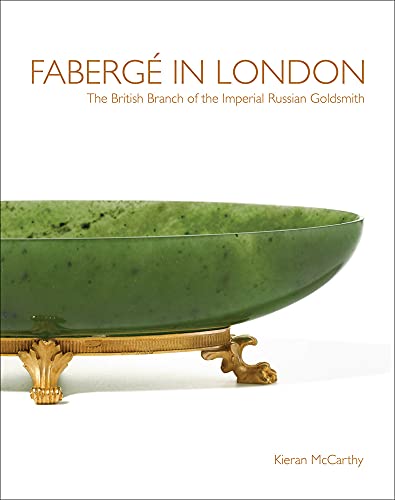 Royalty, Aristocrats, American heiresses, exiled Russian Grand Dukes, Randlords, Maharajas, Socialites and financiers with newly made fortunes flocked to Fabergé in London to buy gifts for each other. This book is the first dedicated to the glittering history of Fabergé's British branch, from its opening in 1903 to its closure in 1917. The Imperial Russian Goldsmith's London branch was the only one outside of Russia and its jewelled and enamelled contents were as popular there as they were in St. Petersburg or Moscow.

Using previously unreferenced sources and a newly discovered archive of papers relating to Fabergé in London, Kieran McCarthy studies the branch's structure, customers and exclusive stock. The most expensive sale made by Fabergé in London, of a diamond tiara priced for £1400, cost one hundred times the annual wage of a scullery maid. It will be of interest to enthusiasts of the decorative arts, the social history of the Edwardian Golden Age and especially of European Royalty. Faberge's works were and continue to be intimately associated with the British Royal Family. ForViolet Trefusis, daughter of King Edward VII's mistress Mrs. Keppel and lover of Vita Sackville-West, A Fabergé cigarette case was the emblem of Royalty, as symbolical as the bookies cigar, or the ostler's straw.

Kieran McCarthy is a director of Wartski, the London Court Jewellers who specialises in the work of Carl Fabergé. He is on the advisory board of the Fabergé Museum in St. Petersburg, is a freeman of the Worshipful Company of Goldsmiths' and a fellow of the Gemmological Association. He has written and lectured extensively about Carl Fabergé. He advises collectors and institutions on Fabergé's work and recently revealed the rediscovery of one of the lost Imperial Fabergé Easter Eggs.

2. Fabergďż˝ in London: The British Branch of the Imperial Russian Goldsmith

3. Fabergé in London: The British Branch of the Imperial Russian Goldsmith

Book Description Acc Art Books, 2017. Condition: Good. A+ Customer service! Satisfaction Guaranteed! Book is in Used-Good condition. Pages and cover are clean and intact. Used items may not include supplementary materials such as CDs or access codes. May show signs of minor shelf wear and contain limited notes and highlighting. Seller Inventory # 1851498281-2-4