Items related to The Book of Mordechai: A Study of the Jews of Libya... 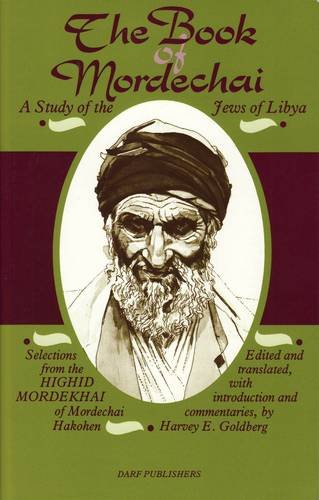 A fascinating record of Libyan Jewish life written by a Talmudic scholar, teacher, itinerant peddler and amateur anthropologist named Mordechai Hakohen. Composed in the early years of the twentieth century, it covers domestic life, religion, trade, as well as relations of Jews to Arabs, Berbers, and the Italians who invaded in 1911. The manuscript was partially published in Italian, then ignored for many years until Dr. Harvey Goldberg's recent discovery of it. For anthropologists, "Book of Mordechai" is the only reliable, ethnographically oriented portrayal of North African Jewish life of this period. Also, as Dr. Goldberg points out, Hakohen's work helps to resolve some broad problems of ethno-history, such as the distinction between "Arab" and "Berber" and the position of Jews in North African Society. To accompany his 1978 edition in Hebrew, Dr. Goldberg has now translated the most important sections into English, adding extensive commentaries and notes.

MORDECHAI HAKOHEN. (1856-1929) Was born in Tripoli to a Jewish family of Italian descent. Although he had little formal education as a child, and began his career as a humble teacher and peddler, he later became a clerk in the Rabbinic court and then a magistrate in Benghazi. To his familiarity with the history and customs of the jews of Libya he added information gathered from research trips through the countryside. The fruit of his kowledge was the HIGHID MORDEKHAI, here translated into English for the first time.

1. The Book of Mordechai: A Study of the Jews of Libya