Items related to Japanese Political History Since the Meiji Restoration,... 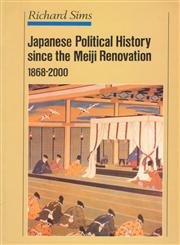 Modern Japanese political history has been eventful, as Japan transformed from a decentralized feudal regime into a nation state which seemed to be following a Western pattern of modernisation until the 1930s. This volume explores the changes in the political process behind these developments.

'Superbly designed and printed, the front cover a veritable work of art, illustrated throughout, while standards of academic publishing steadily decline, what a pleasure to see a book as well produced as this. The book's content fully matches expectations. To complete such a comprehensive, lucid survey of Modern Japan's stormy and tortuous political history from 1868 to the present day is an impressive achievement.' -Jnl Royal Asiatic Society

Richard Sims has taught Modern Japanese History at the School of Oriental and African Studies, University of London, since 1966. His previous books include Modern Japan (1973) and French Policy Towards the Bakufu and Meiji Japan 1854-1895 (1998),