Items related to Prosperity without Growth: Economics for a Finite Planet

Jackson, Tim Prosperity without Growth: Economics for a Finite Planet

Prosperity without Growth: Economics for a Finite Planet 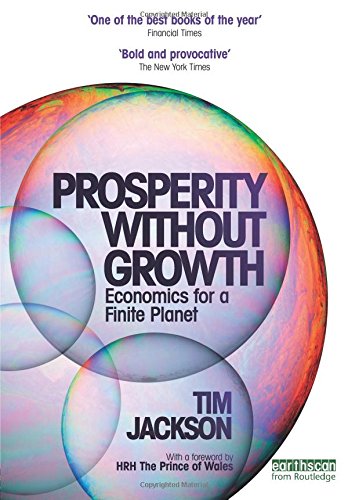 * With a new Foreword by HRH The Prince of Wales * 10% of proceeds from the sales of this book will be donated to rainforest protection. * Is more economic growth the solution? Will it deliver prosperity and well-being for a global population projected to reach nine billion? In this explosive book, Tim Jackson - a top sustainability adviser to the UK government - makes a compelling case against continued economic growth in developed nations. No one denies that development is essential for poorer nations. But in the advanced economies there is mounting evidence that ever-increasing consumption adds little to human happiness and may even impede it. More urgently, it is now clear that the ecosystems that sustain our economies are collapsing under the impacts of rising consumption. Unless we can radically lower the environmental impact of economic activity - and there is no evidence to suggest that we can - we will have to devise a path to prosperity that does not rely on continued growth. Economic heresy? Or an opportunity to improve the sources of well-being, creativity and lasting prosperity that lie outside the realm of the market? Tim Jackson provides a credible vision of how human society can flourish - within the ecological limits of a finite planet. Fulfilling this vision is simply the most urgent task of our times. This book is a substantially revised and updated version of Jackson's controversial study for the Sustainable Development Commission, an advisory body to the UK Government. The study rapidly became the most downloaded report in the Commission's nine year history when it was launched earlier this year. You can read more reviews and watch Tim Jackson's recent TEDGlobal talk at www.earthscan.co.uk/pwg

'A new movement seems to be emerging, and this superbly written book should be the first stop for anyone wanting a manifesto... In terms of a worldview for the new decade and beyond, this could well be the most important book you will read.' --The Guardian

'One of the best books of the year' --Financial Times

'On a planet with finite resources, perpetual growth is not only impossible, but it is endangering the survival of present and future generations. I urge everyone to read Tim Jackson's brilliant and visionary book. He offers a detailed critique of the existing economic paradigm, and makes compelling suggestions for a shared and lasting prosperity.' ***** Read more reviews at http://www.earthscan.co.uk/?tabid=102863#dnn_ctr288528_ViewProductInfo_fragment3 --Bianca Jagger, Founder and Chair, Bianca Jagger Human Rights Foundation; Council of Europe Goodwill Ambassador; Member of the Executive Director's Leadership Council, Amnesty International, USA; Trustee, Amazon Charitable Trust

Tim Jackson is Economics Commissioner on the UK Sustainable Development Commission. He is also Professor of Sustainable Development at the University of Surrey and Director of the ESRC Research Group on Lifestyles, Values and Environment (RESOLVE). In addition to his scientific work, Tim is an award-winning dramatist with numerous BBC radio writing credits to his name.

1. Prosperity Without Growth: Economics for a Finite Planet

2. Prosperity Without Growth: Economics for a Finite Planet

3. Prosperity Without Growth: Economics for a Finite Planet