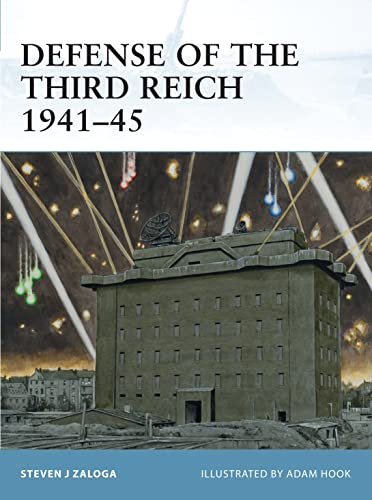 Starting in 1940, Germany was subjected to a growing threat of Allied bomber attack. The RAF night bombing offensive built up in a slow but unrelenting crescendo through the Ruhr campaign in the summer of 1944 and culminating in the attacks on Berlin in the autumn and early winter of 1943-44. They were joined by US daylight raids which first began to have a serious impact on German industry in the autumn of 1943. This book focuses on the land-based infrastructure of Germany's defense against the air onslaught. Besides active defense against air attack, Germany also invested heavily in passive defense such as air raid shelters. While much of this defense was conventional such as underground shelters and the dual use of subways and other structures, Germany faced some unique dilemmas in protecting cities against night fire bomb raids. As a result, German architects designed massive above-ground defense shelters which were amongst the most massive defensive structures built in World War II.

..". a solid, well-written introduction to the infrastructure that supported [the defense of the Reich]." --Bolling Smith, The Coast Defense Journal (November 2012)

..".provides an overview of the lavish Flak defenses and their artillery, considering how Flak was deployed and how a variety of structures were created to enhance its performance. German defenses and systems receive an in-depth analysis complete with illustrations by Adam Hook in a fine presentation for any military history holding." --James A. Cox. The Midwest Book Review (January 2013)

Details the active and passive defenses created by the Germans in order to thwart the Allied bombing campaign in World War II.