Items related to Blood, Iron and Gold: How the Railways Transformed...

Wolmar, Christian Blood, Iron and Gold: How the Railways Transformed the World

Blood, Iron and Gold: How the Railways Transformed the World 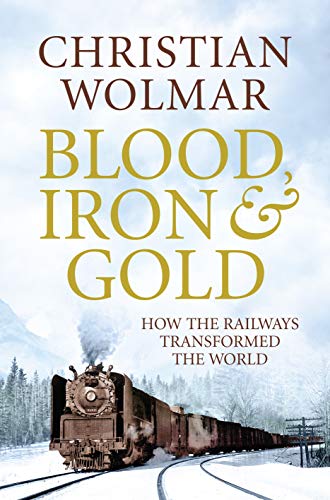 The opening of the Liverpool and Manchester Railway in 1830 marked the beginning of a transport revolution. Blood, Iron and Gold reveals the huge impact of the railways as they spread rapidly across the world, linking cities that had hitherto been isolated, stimulating both economic growth and social change on an unprecedented scale.

From Panama to the Punjab, Tasmania to Turin, Christian Wolmar describes the vision and determination of the pioneers who developed railways that would one day span continents, as well as the labour of the navvies who endured horrific conditions to build this global network.

Wolmar shows how the rise of the train stimulated daring feats of engineering, architectural innovation and the rapid movement of people and goods around the world. He shows how cultures were enriched - and destroyed - by the unrelenting construction and how the railways played a vital role in civil conflict, as well as in two world wars. Indeed, Blood, Iron and Gold reveals that the global expansion of the railways underpinned nothing less than the spread of modernity and the making of the modern world.

'This authoritative and highly readable book will remain the definitive history for years to come.' --Michael Williams, Daily Telegraph

`Wolmar brings great energy to the task of explaining how the railways transformed the world.'
-- New Statesman

Christian Wolmar is a writer and broadcaster, principally on transport matters. He writes regularly for a wide variety of publications including the Independent, Evening Standard and Rail magazine, and appears frequently on TV and radio as a commentator. His previous books include the widely-acclaimed The Subterranean Railway, a history of the London underground and Fire and Steam, a history of how the railways transformed Britain.

1. Blood, Iron and Gold: How the Railways Transformed the World [Hardcover] Wolmar, Christian and Illustrated