Items related to The Pirates Next Door

Duddle, Jonny The Pirates Next Door

The Pirates Next Door 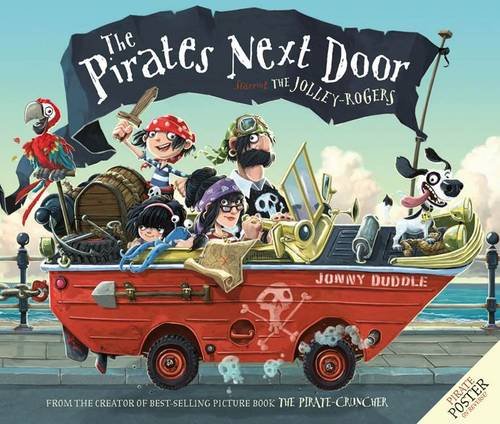 Meet the Jolley-Rogers - a pirate family who're moving to Dull-on-Sea, a quiet seaside town. Stopping to fix up their ship, this unusual family get the whole neighbourhood spreading rumours. Defying the grown-ups, Matilda from next door decides to become friends with the youngest pirate son. When the Jolley-Rogers leave, the town discovers they were wrong to assume the worst - the pirate clan have buried treasure in everyone's gardens (shown in a stunning double-gatefold). Matilda feels sad until she discovers her own treasure - an incredibly exciting new pen friend.

Duddle's rhymes have the buoyant, singsong quality of a sea shanty... he does an excellent job of exaggerating the pirates' slightly menacing yet silly appearance and the concerned glances and raised eyebrows of the unwelcoming community.
--Publishers Weekly

A jolly good tale for one-on-one sharing.
--School Library Journal Veiled in humor, but hard not to read as a parable that tweaks narrow minds and parochial attitudes.
--Kirkus Reviews The digital art features slightly exaggerated figures that could easily have stepped out of an animated film... The real fun comes in the contrast between the visual minutiae of the pirate family and the depiction of the "normal" people. It's in no way subtle, but pirate-wannabes won't bat an eye patch.
--The Bulletin of the Center for Children's Books Duddle has written a delightful story sure to entertain all pirate lovers!
--Library Media Connection (highly recommended) We've all wanted to run off and be pirates sailing the seven seas and shouting "Argh" at people, but how many of us have had pirates move in next door? Matilda has.
--Huffington Post Parents blog About the Author:

Jonny Duddle lives in North Wales with his wife and young family. He is the concept artist for Aardman Animation's forthcoming film The Pirates! (UK release March 2012). He has also written and illustrated the hugely successful picture book The Pirate-Cruncher, (Templar Publishing) longlisted for the Greenaway Medal, and illustrated the cover for Nation by Terry Pratchett, shortlisted for Best Children's Illustrated Book at the English Association Book Awards.

1. The Pirates Next Door

Book Description Paperback. Condition: Very Good. The book has been read, but is in excellent condition. Pages are intact and not marred by notes or highlighting. The spine remains undamaged. Seller Inventory # GOR004236054

2. The Pirates Next Door

Book Description Paperback. Condition: Good. The book has been read but remains in clean condition. All pages are intact and the cover is intact. Some minor wear to the spine. Seller Inventory # GOR005263497

3. The Pirates Next Door

Book Description Paperback. Condition: Fair. A readable copy of the book which may include some defects such as highlighting and notes. Cover and pages may be creased and show discolouration. Seller Inventory # GOR006462667

4. The Pirates Next Door

Book Description -. Hardcover. Condition: Very Good. The Pirates Next Door This book is in very good condition and will be shipped within 24 hours of ordering. The cover may have some limited signs of wear but the pages are clean, intact and the spine remains undamaged. This book has clearly been well maintained and looked after thus far. Money back guarantee if you are not satisfied. See all our books here, order more than 1 book and get discounted shipping. Seller Inventory # 7719-9781848772199

5. The Pirates Next Door

Book Description Templar Publishing, 2011. Hardcover. Condition: Used; Good. **Simply Brit** Shipped with Premium postal service within 24 hours from the UK with impressive delivery time. We have dispatched from our book depository; items of good condition to over ten million satisfied customers worldwide. We are committed to providing you with reliable and efficient service at all times. Seller Inventory # 2115551