Items related to My Hamster is a Pirate (Stinky & Jinks 5) (Stinky...

My Hamster is a Pirate (Stinky & Jinks 5) (Stinky and Jinks) 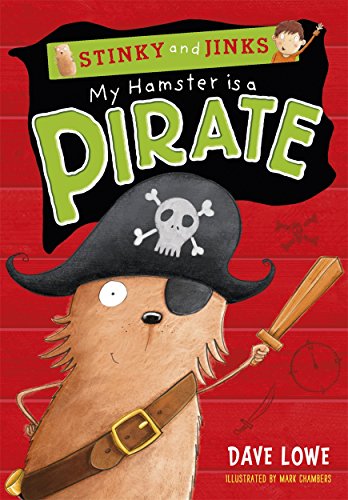 Nine-year-old Benjamin Jinks and his family are off for a holiday by the seaside, and his genius-hamster is coming with them. But the pair soon uncover the mystery of some stolen diamonds and set about trying to solve the crime. Can they find the jewels before the criminals get their hands on them once more? This fifth book in the acclaimed Stinky and Jinks series has the all the hallmark excitement, warmth and a hamster hilarity that readers have come to expect from Dave Lowe.

My Hamster is a Pirate

Dave Lowe (Author)
Dave Lowe grew up in Dudley in the West Midlands, and now lives in Brisbane, Australia, with his wife and two daughters. He spends his days writing books, drinking lots of tea, and treading on Lego that his daughters have left lying around. Dave is the author of the successful STINKY AND JINKS: MY HAMSTER series, which follow the adventures of a nine-year-old boy called Ben, and Stinky, Ben's genius pet hamster. (When Dave was younger, he had a pet hamster too. Unlike Stinky, however, Dave's hamster didn't often help him with his homework.) He has also written the DADVENTURE books, winner of the KS1 Teach Primary Award 2018. Find Dave online at @daveloweauthor or www.davelowebooks.com

The Boy Fitz Hammond (Illustrator)
Born in York in the late 1970s, The Boy Fitz Hammond now lives in Edinburgh with his wife and their two sons. A freelance illustrator for well over a decade, he loves to draw in a variety of styles, allowing him to work on a range of projects across all media. Find him online at www.nbillustration.co.uk/the-boy-fitz-hammond or on Twitter @tbfhDotCom.

Book Description Templar Fiction 01/06/2014, 2014. Paperback. Condition: Very Good. Shipped within 24 hours from our UK warehouse. Clean, undamaged book with no damage to pages and minimal wear to the cover. Spine still tight, in very good condition. Remember if you are not happy, you are covered by our 100% money back guarantee. Seller Inventory # 6545-9781848771703

Book Description Paperback. Condition: Very Good. The book has been read, but is in excellent condition. Pages are intact and not marred by notes or highlighting. The spine remains undamaged. Seller Inventory # GOR006935348

3. My Hamster is a Pirate

4. My Hamster is a Pirate

Book Description Templar Publishing, 2014. Condition: Good. Ships from the UK. Former Library book. Shows some signs of wear, and may have some markings on the inside. Seller Inventory # GRP82755837

Book Description -. Paperback. Condition: Very Good. My Hamster is a Pirate (Stinky & Jinks 5) (Stinky and Jinks) This book is in very good condition and will be shipped within 24 hours of ordering. The cover may have some limited signs of wear but the pages are clean, intact and the spine remains undamaged. This book has clearly been well maintained and looked after thus far. Money back guarantee if you are not satisfied. See all our books here, order more than 1 book and get discounted shipping. Seller Inventory # 7719-9781848771703

6. My Hamster is a Pirate (Stinky & Jinks 5) (Stinky and Jinks) Dave Lowe and Mark Chambers