Breverton, Terry Immortal Words: History's Most Memorable Quotations and the Stories Behind Them

Immortal Words: History's Most Memorable Quotations and the Stories Behind Them 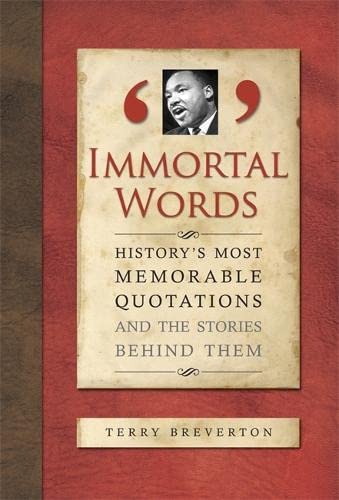 Immortal Words is an anthology of history's most memorable, uplifting or thought-provoking quotations from all ages and nations. The texts are drawn not only from the works and words of great writers, thinkers and orators, but also from less well-known sources such as gravestones, book dedications, speeches and political manifestos, letters and diaries, inscriptions and chance remarks. Each of the 370 quotations is accompanied by an extended annotation that tells the story of the speaker or explains the circumstances that gave rise to the quotation. The words and sentiments expressed have been used to encapsulate the human condition, to inspire great works or deeds in times of hardship, or simply reflect the spirit of the time - they will live with you and inspire you day by day, from one year's end to the next. Sample entries include: Marcus Aurelius - 'Nowhere can a man find a quieter or more untroubled retreat than in his own soul ...'. Martin Luther King - 'I have a dream ...'. John F. Kennedy - 'Ask not, what your country ...'. John Gillespie Magee, Royal Air Force pilot, 1941 - 'High Flight'. Ronald Reagan - 'Tear down his wall ...'. Isadora Duncan - on her sickbed, writes a feverishly passionate letter to her lover, the actor Gordon Craig. Mother Teresa of Calcutta - 'Life is ...'. Colonel Tim Collins of the Royal Irish Regiment, March 19 2003 - 'We come not to conquer ...". Emma Lazarus - 'The New Colossus' (plaque on Statue of Liberty). Joseph Stalin - first broadcast to the Russian people after the German invasion, July 3 1941. Mahatma Gandhi - 'I am a man of peace ...'. Abraham Lincoln - on leaving Springfield, Illinois, to take the oath as President. February 11, 1861. Cicero - quoting Cato the Elder, in De Senectute (On Old Age), 44 BC. Charles Lindbergh - describing the last minutes of his pioneering non-stop flight from New York to Paris in 1927. Nelson Mandela - 'I am the First Accused'. Buddha - 'All acts of living creatures become bad by ten things ...'. Benjamin Franklin - writes a first draft of his own epitaph. Thomas Jefferson - 'Force cannot change right ...Winston Churchill - 'Never in the field of human conflict ...'. Adolf Hitler - 'My patience is now at an end'. Edward Everett - President of Harvard on the protest of the student body against the admission of a Negro student. Francis Bacon - 'This world's a bubble; and the life of Man Less than a span ...'. Horatio Nelson - 'Separated from all I hold dear in this world ...'. Charlotte Cushman - inscription on the curtain of Ford's Opera House, Baltimore. Shakespeare - 'Once more unto the breach ...' Henry V. Marie Antoinette - letter to her sister on the day of her execution. Ludwig Van Beethoven - 'I carry my ideas about me for along time, often a very long time...'. Aldous Huxley 1920- 'A million million spermatozoa ...'. Eleanor Roosevelt - speaking on the function of hatred in a just cause. Indira Gandhi - 'Women's education is almost more important than the education of boys and men.'

The who, when, where, and why of 370 of history's most memorable quotations.
`Man is the measure of all things.'
`Make hay while the sun shines.'
`Veni, vidi, vici.'
`How do I love thee? Let me count the ways.'
`No man is an island.'
`Fools rush in where angels fear to tread.'
`A thing of beauty is a joy for ever.'
`The only thing we have to fear is fear itself.'
`Ask me no questions and I'll tell you no lies.'
`This was their finest hour.'
`Ask not what your country can do for you.'
`Yes, we can.'

Terry Breverton is a former businessman, consultant and academic and now a full-time writer. He is the author of numerous books has been awarded the Welsh Books Council 'Book of the Month' award five times.

1. Immortal Words: History's Most Memorable Quotations and the Stories Behind Them

2. Immortal Words: History's Most Memorable Quotations and the Stories Behind Them

3. Immortal Words: History's Most Memorable Quotations And The Stories Behind Them

4. Immortal Words: History's Most Memorable Quotations and the Stories Behind Them