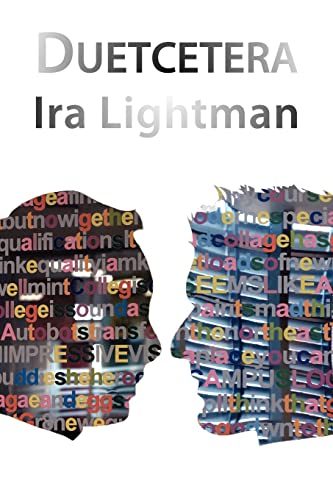 Duetcetera is about voices taking each other for granted, saying "etc etc" and not listening, nevertheless turning out to duet. It contains double- and multi-columned poems, where each column can be read in its own right (or left), and also read across the columns. Most of the poems (and translations) were written separately from each other, but happen to fit together. The poems play separately in different rhythms and moods yet sound with and against each other. Ira is recording many of them as duet-videos for his YouTube channel. The themes of the collection range from celebration of marriage and fatherhood, to the feeling of being in a Quaker congregation wherever you go. The book ends on an extended sequence written half in the voice of a six-year-old boy, and half as a set of statements about what's influencing the language and ideas of the overall book.

Ira Lightman wanted to be a vicar. He is a poet who makes Public Art, mainly in the North East of England, where he lives. His pieces include The Spennymoor Letters, ten 2-metre high poems made to look like the letters S, P, E, N, N, Y etc, the Gatesheads and the Blythscopes, coloured text in head and binocular shapes, Glade (a river of text) and the Family Tree Forest. He appears regularly on Radio 3's The Verb, writing Pi mnenomics, Miltonic verse while blindfolded, and a poem entirely out of words containing a double L, as a collaboration with Peter Finch. He likes to make formal innovations for special occasions.

Book Description Paperback. Condition: Very Good. The book has been read, but is in excellent condition. Pages are intact and not marred by notes or highlighting. The spine remains undamaged. Seller Inventory # GOR008817178