Items related to All You Ever Wanted To Know From His Holiness The Dalai...

All You Ever Wanted To Know From His Holiness The Dalai Lama On Happiness, Life, Living And Much More: Conversations With Rajiv Mehrotra

Dalai Lama, His Holiness The 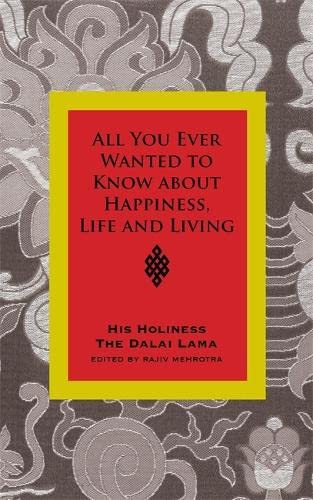 Tenzin Gyatso describes himself as 'a simple Buddhist monk'. However, to the world he is The Dalai Lama, or simply His Holiness - the embodiment of the Buddhist ideal of compassion. Evoking global respect and admiration, he is both a prophet and a statesman for our troubled times, yet he is intensely human and accessible. This remarkable book is an edited compilation of mostly personal conversations that His Holiness the Dalai Lama has had over nearly twenty years with one of his early disciples, Rajiv Mehrotra, now Trustee and Secretary of The Foundation for Universal Responsibility, which was established with the funds from the Nobel Peace Prize.Here the Dalai Lama is a teacher to a spiritual aspirant; a divine master and a temporal leader; an ambassador for Tibet and a lovable guru-philosopher to the whole world; a practitioner of the 2,500-year-old teachings of Buddhism with also a keen interest in science; and, a Tibetan Buddhist and an interfaith ambassador. His multiple roles and aspects may appear contradictory at times, but nonetheless he lives his life with a rare quality of ease and happiness.

In these pages, his disarming candour, his deep empathy for his student's quest, and his wisdom, garnered not just from texts and scriptures but also from an active engagement with life, offer invaluable insights to us all on how we too may find true happiness in our lives. About the Author:

Rajiv Mehrotra hosts one of India's longest running talk shows on public television, "In Conversations", and has been a disciple of the Dalai Lama for twenty years.

1. All You Ever Wanted to Know from His Holiness the Dalai Lama on Happiness, Life, Living and Much More Mehotra, Rajov