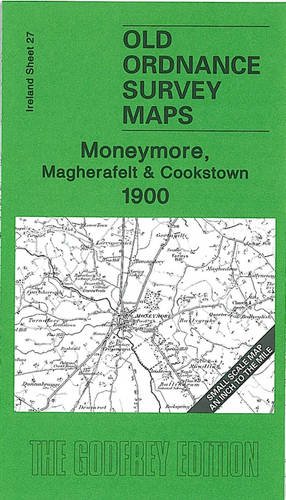 Ireland Sheet 27 Moneymore, Magherafelt & Cookstown 1900 - published 2009; intro by Alan Godfrey. This Inch to the Mile map covers an area north and west of Lough Neagh, with coverage stretching from Cookstown northward to Castle Dawson and eastward to Staffordstown. About half the map is in Co Londonderry, with a good area of Co Antrim and a small segment of Co Tyrone. Features include the towns of Cookstown and Magherafelt, and the map also includes Castledawson and Moneymore, regarded as towns at the time. There are several railways - all long since closed: the main Northern Counties line through Toome to Magherfelt and Cookstown, a short stretch of the Derry Central Railway (still independent at the time) and a section of the Draperstown line. Other features include Slieve Gallion, the small port of Ballyronan, Lough Beg and Church Island, Moyola Park. On the reverse we include a more detailed map for Moneymore. It is not possible to list the many hamlets, farmsteads and other topographical features shown on these maps. However, you may find it useful if we list the towns and principal villages or church parishes that are included on this map. Co Antrim: Staffordstown, Toome Co Londonderry: Ballyeglish, Ballyronan, Castledawson, Curran, Desertmartin, Gracefield, Magherafelt, Moneymore, Tamlaght, The Loup. Co Tyrone: Coagh, Cookstown.