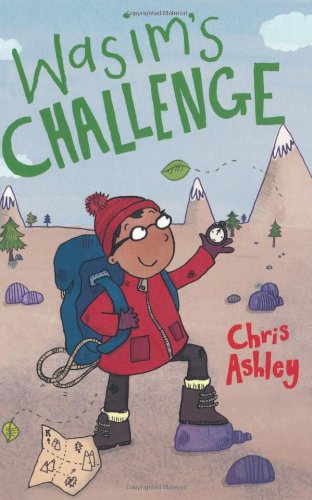 It is the school journey. Year Five are off to Snowdonia on a Challenge by Choice (CBC) week. Wasim Ahmed is going. He has his brand new kit and has been looking forward to it for months. Wasim's initial enjoyment is as usual marred by his ability to annoy people without meaning to but on this occasion there is a bigger factor that he hasn't fully thought through. In a coming of age bid sparked by a comment from another child at his mosque, Wasim has vowed to partake in the Ramadan fast leading up to the Eid festival. But he has also decided to keep his dawn to dusk fast secret. Inevitably lack of food and drink causes his behaviour to deteriorate and he has to sit out the first day's activities. During the day a box of Mars bars disappears and Wasim beomes prime suspect. Then the next day a walk turns into near disaster as the group gets lost. Fainting with hunger, Wasim finds himself in serious danger on the mountainside. This gripping story is a first-class adventure which shows the challenges faced by a Muslim child in multicultural Britain.

Chris Ashley does a brilliant job of integrating Wasim's determination to fast into an exciting drama. Ashley is particularly good on the anxieties of school life - not surprising really as he is a headteacher. (Nursery Education)

Ashley has a lively style with short sharp sentences and a contemporary vocabulary. A headmaster as well as a writer, he has a keen ear for the language of primary school children, and insight into their behaviour and motivation. It is particularly refreshing to have titles in which the multicultural nature of city schools is represented – and by the main protagonist. It is also refreshing to have a situation involving Ramadan and its demands as a central theme. There must be many young readers for whom this is a very real scenario. Both of these titles are well worth recommending especially to boys, KS2 and even a little older. Full of everyday action and humour, they move along smartly, never condescending or talking down. Let us hope there will be more Wasim titles. (Books for Keeps)

Chris Ashley, the son of children's book writer Bernard Ashley, was born in south-east London and his childhood was dominated by sport and children's books. He trained as a teacher and began writing in the 1980s. He is the head teacher of a school in Bury. Kate Pankhurst graduated from the University of Central Lancashire with a degree in illustration. She was the highest placed graduate in a national student competition, The Macmillan Prize for Children's Book Illustration in 2002. Since then she has illustrated several books including Captain Pike Looks After the Baby by Marjorie Newman and Who's a Cheeky Baby? by Ian Whybrow. She has also illustrated Wasim One Star and Wasim the Wanderer for Frances Lincoln Publishers. Having completed her Masters in Children's Book illustration, Kate also lectures part-time at UCLan. She currently lives in Leeds.

Book Description Paperback. Condition: Very Good. The book has been read, but is in excellent condition. Pages are intact and not marred by notes or highlighting. The spine remains undamaged. Seller Inventory # GOR002331362

Book Description Frances Lincoln Children's Books 22/07/2010, 2010. Paperback. Condition: Very Good. Shipped within 24 hours from our UK warehouse. Clean, undamaged book with no damage to pages and minimal wear to the cover. Spine still tight, in very good condition. Remember if you are not happy, you are covered by our 100% money back guarantee. Seller Inventory # 6545-9781847800565

Book Description -. Paperback. Condition: Very Good. Wasim's Challenge This book is in very good condition and will be shipped within 24 hours of ordering. The cover may have some limited signs of wear but the pages are clean, intact and the spine remains undamaged. This book has clearly been well maintained and looked after thus far. Money back guarantee if you are not satisfied. See all our books here, order more than 1 book and get discounted shipping. Seller Inventory # 7719-9781847800565

Book Description Frances Lincoln Childrens Books, 2010. Paperback. Condition: Used; Good. **Simply Brit** Shipped with Premium postal service within 24 hours from the UK with impressive delivery time. We have dispatched from our book depository; items of good condition to over ten million satisfied customers worldwide. We are committed to providing you with reliable and efficient service at all times. Seller Inventory # 1166510

Book Description Frances Lincoln Childrens Books, 2010. Paperback. Condition: Used; Good. ex library copy **SHIPPED FROM UK** We believe you will be completely satisfied with our quick and reliable service. All orders are dispatched as swiftly as possible! Buy with confidence!. Seller Inventory # 2284120