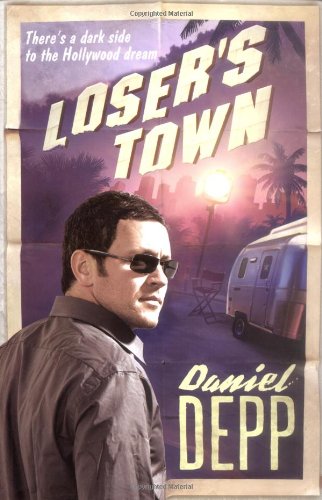 Summoned to the trailer of a Hollywood star who's receiving death threats, former stuntman-turned-private investigator, David Spandau, assumes this will be another routine case. It turns out to be anything but. A-list actor Bobby Dye has become entangled with B-list gangster Richie Stella, who just wants to make a movie - and you can't make a movie without a star. But as Richie and his cohorts are about to find out, the movie business makes the cocaine and heroin racket look like child's play. Meanwhile, Spandau finds himself drawn ever deeper into the crazy world of Bobby Dye, one of the handsomest, most idolized men on the planet - and also one of the loneliest. All Bobby wants is someone to talk honestly to him - but can he really cope with the blunt and bitter truth?

'Introduces us to Hollywood private eye David Spandau in a mix of thrills and comedy that recalls vintage Laurence Shames. Recommended.' UNCUT MAGAZINE 'Hold onto your hats, ladies. Daniel Depp, the half-brother of the actor, Johnny, and latterly the author of a detective novel, is coming to London for a PR offensive before his debut, Loser's Town, hits the shelves on 16 March' Diary, Independent 20/2 'A brilliant debut thriller ... This is the dark side of Hollywood made all the more vivid because author Daniel is the screenwriting half-brother of Johnny Depp ... Four stars' DAILY MIRROR 'A stunner! Daniel Depp's debut novel ploughs deep into the sleazy world of Hollywood movie-makers, of which he has real experience, and it shows ... This one is a diamond. I loved every page.' Mark Timlin, INDEPENDENT ON SUNDAY 'Wickedly funny, hugely entertaining ... A fast-paced caper set amid the bright lights of the City of Angels, it's sure to appeal to fans of Raymond Chandler, Elmore Leonard and James Ellroy. Brimming with seamy details that speak to insider knowledge, it'll leave you laughing and puzzling over which industry is more unsavoury: organised crime or movie making' THE SCOTSMAN 'The fast-moving plot involves blackmail, sex, drugs and murder and shows those who work in the business are just as vile as mafiosi. The chief attractions of this debut performance are the gallery of eccentric minor characters and the satirical portrayal of the rituals of La-La Land ... Often laugh-out-loud funny' DAILY TELEGRAPH 'Depp's cynicism, along with his mordant wit and insider's knowledge of the industry, gives the story real bite' THE LONDON PAPER 'Think GET SHORTY with a lot more drugs and a lot less Danny DeVito' SHORTLIST 'It's fun trying to guess who the real people are behind this insider novel. Spandau walks in the same gym-shoes as Philip Marlowe: a hardbitten man who has seen it all yet somehow protects a heart of gold for when it's most needed' METRO 'A rattling good read ... The novel paints a dark, atmospheric picture of Los Angeles and all its sleaze, with observations as entertaining as the plot itself' IRISH HERALD 'Refreshingly droll and painstakingly malevolent, LOSER'S TOWN is a novel that takes a good look at Hollywood, warts and all' SHOTS 'One of those delicious noir novels about vice and corruption in Hollywood ... Depp creates characters as memorable as some of Elmore Leonard's ... LOSER'S TOWN wins on every count. It's cynical, sexy, funny and suspenseful' NEW YORK DAILY NEWS 'Brilliant debut thriller - 4 stars' Book of the Week, Mirror 03/03 'There are a mere handful of writers who can describe a situation to the degree that it can send me into giggling fits: Hunter Thompson, Terry Southern, Tom Robbins, Bruce Robinson and my very own brother, Daniel. Yes I'm biased, but what brother wouldn't be? I'd be recommending this book, blood or no blood!' JOHNNY DEPP (in an email to USA TODAY) 'A stunner! The debut novel of Daniel (half-brother of Johnny) Depp ploughs deep into the sleazy world of Hollywood movie-makers, of which he has real experience, and it shows. Featuring David Spandau, a stuntman turned PI who only takes cases he wants to, and would rather be working as a rodeo rider. Bobby Dye, superstar acting talent is getting death threat, or is he? What's certain is that he's mixing with folks from the wrong side of town. This one is a diamond. I loved every page' Independent on Sunday 12/4 'Having been a part of Tinseltown, Depp was in a unique position to utilise his insider knowledge. "I couldn't resist taking a few playful pokes at all the Hollywood foolishness. I think it accurately reflects the way the town can take itself too seriously, and it certainly tried to show how dangerous the whole 'star' phenomenon can be for all concerned, especially the actors."' Interview to coincide with Edinburgh Festival appearance, The List 13/8 'One day my English agent said to me: "You're doing okay now, you can finally write that novel." We'd been talking for a while about me writing a detective novel about Hollywood. I had what they called a unique inside perspective, meaning I was probably going to piss off a lot of people when I did write it. Writers generally don't like to piss off Hollywood, because writers generally starve, and their one distant hope of fiscal solvency is to sell a novel to the movies. There's lots of money in Hollywood, or have I mentioned that? The thing is, I've been to Hollywood and, frankly my dear, I don't give a damn' Interview, The Sunday Times 25/7

Daniel Depp is a former Hollywood screenwriter and film producer whose first full-length screenplay, THE BRAVE, was nominated for a Palme D'Or at Cannes. Daniel now divides his time between California and the south of France.