Items related to An Autobiography 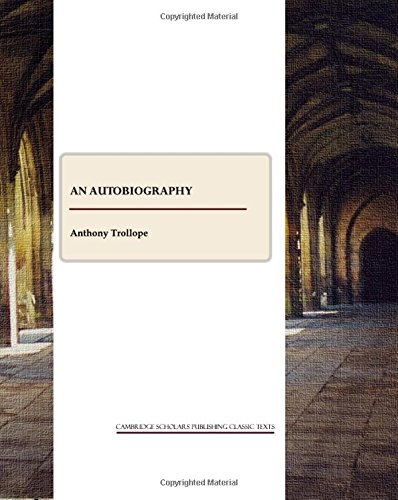 Trollope's autobiography, despite causing him problems with critics after his death for his attitudes to writing, is considered one of the most significant autobiographies of its period.

Anthony Trollope (1815-1882) started his writing career while working in Ireland as a postal surveyor. Travelling around the country, Trollope gained knowledge of the country and its people which proved to be useful material for his first two novels, The Macdermots of Ballycloran (1847) and The Kellys and the O'Kellys (1848). Trollope soon started writing fiercely, producing a series entitled Chronicles of Barsetshire. The Warden, the first in the series, was published in 1855. Barchester Towers (1857), the comic masterpiece, Doctor Thorne (1858), Framley Parsonage (1861), The Small House at Allington (1864) and The Last Chronicle of Barset (1867) followed, portraying events in an imaginary English county of Barsetshire. In 1867, Trollope left the Post Office to run as a candidate for the Parliament. Having lost at the elections, Trollope focused on his writing. A satire from his later writing, The Way We Live Now (1875) is often viewed as Trollope's major work, however, his popularity and writing reputation diminished at the later stage of his life. Anthony Trollope died in London in 1882.

Book Description Condition: Good. A+ Customer service! Satisfaction Guaranteed! Book is in Used-Good condition. Pages and cover are clean and intact. Used items may not include supplementary materials such as CDs or access codes. May show signs of minor shelf wear and contain limited notes and highlighting. Seller Inventory # 1847186653-2-4

Book Description Paperback. Condition: Very Good. Item is in very good condition. If supplemental codes/CDs for textbooks are required please contact us prior to purchasing as they may be missing. Photos are stock pictures and not of the actual item. Seller Inventory # DS-1847186653-2