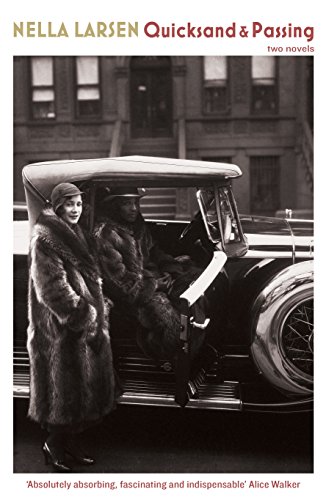 A writer of the Harlem Renaissance, Nella Larsen wrote just two novels, published here, and a handful of short stories. Critically acclaimed, both speak powerfully of the contradictions and restrictions experienced by black women at that time.

Quicksand, written in 1928, is an autobiographical novel about Helga Crane, a mixed race woman caught between fulfilling her desires and gaining respectability in her middle class neighbourhood.

Written a year later, Passing tells the story of two childhood friends, Clare and Irene, both light skinned enough to pass as white. Reconnecting in adulthood, Clare has chosen to live as a white woman, while Irene embraces black culture and has an important role in her community.

Nella Larsen's novels are moving, characterful, and important books. She pioneered writing about the conflicts of sexuality, race and the secret suffering of women in the early twentieth century.

Quicksand and Passing are novels that I will never forget. They open up a whole world of experience and struggle that seemed to me, when I first read them years ago, absolutely absorbing, fascinating and indispensable (Alice Walker)

Quicksand does not just explore the contradictory terrain of women and romance; its sexual politics tear apart the very fabric of the romance form (Hazel Carby, Yale University)

Discovering The Complete Fiction of Nella Larsen is like finding lost money with no name on it. One can enjoy it with delight and share it without guilt (Maya Angelou)

A classic of women's literature in a new, elegant edition