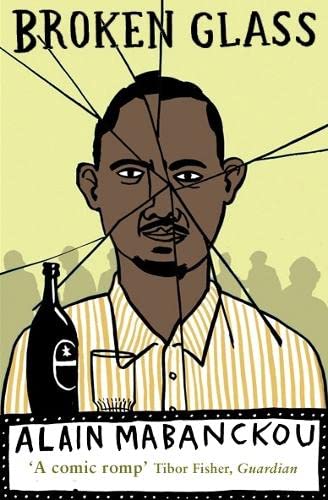 The history of Credit Gone West, a squalid Congolese bar, is related by one of its most loyal customers, Broken Glass, who has been commissioned by its owner to set down an account of the characters who frequent it. Broken Glass himself is a disgraced alcoholic school teacher with a love of French language and literature which he has largely failed to communicate to his pupils but which he displays in the pages of his notebook. The notebook is also a farewell to the bar and to his fellow drinkers. After writing the final words, Broken Glass will go down to the River Tchinouka and throw himself into its murky waters, where his lamented mother also drowned.

Broken Glass is a comic romp that releases Mabanckou's sense of humour... Although its cultural and intertextual musings could fuel innumerable doctorates, the real meat of Broken Glass is its comic brio, and Mabanckou's jokes work the whole spectrum of humour (Tibor Fischer Guardian)

Deserves the acclaim heaped upon it... self-mocking and ironic, a thought-provoking glimpse into a stricken country (Waterstone's Books Quarterly 2009-03-02)

This bar-room yarn-spinner tells his fellow tipplers' tales in a voice that swings between broad farce and aching tragedy. His farewell performance from a perch in "Credit Gone West" abounds in scorching wit and flights of eloquence... vitriolic comedy and pugnacious irreverence. (Boyd Tonkin Independent 2010-04-16)

Book Description Serpents Tail. Paperback. Condition: Good. Connecting readers with great books since 1972. Used books may not include companion materials, some shelf wear, may contain highlighting/notes, may not include cdrom or access codes. Customer service is our top priority!. Seller Inventory # S_274275531

Book Description Serpent's Tail. Unknown Binding. Condition: Used - Good. Good condition. Book will show some signs of wear or age consistent with a used book. Fast dispatch from trusted United Kingdom seller. Fully guaranteed. If unhappy in any way just return for a full refund. You don't even need to pay return postage. If you need further information about the condition of the book please email your questions, we would be delighted to expand on our description or even supply a scanned image. We are proud of our high feedback score and would rather iron out potential problems in the early stages of a purchase and so avoid unnecessary disappointment. Seller Inventory # g26-0047691-5Apr12

Book Description Serpents Tail. Condition: Good. A+ Customer service! Satisfaction Guaranteed! Book is in Used-Good condition. Pages and cover are clean and intact. Used items may not include supplementary materials such as CDs or access codes. May show signs of minor shelf wear and contain limited notes and highlighting. Seller Inventory # 184668675X-2-4