Items related to The Golden Age: The Spanish Empire of Charles V

The Golden Age: The Spanish Empire of Charles V 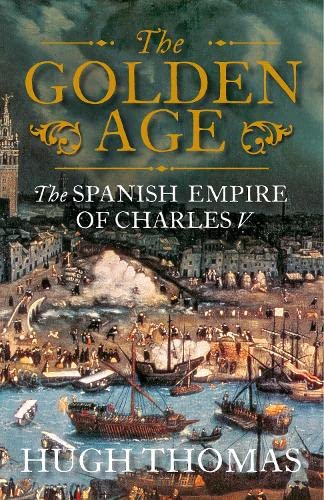 The magisterial and enigmatic Charles V, Emperor of Europe and the New World, is the central figure in the second volume of Hugh Thomas's great history of the Spanish Empire. It begins with the return of the remnants of Magellan's expedition around the world in 1522 and ends with Charles's death in 1558. In the decades between, the Spaniards conquer Guatemala, Yucatan, Columbia, Venezuela, Peru and Chile, and control the banks of the mighty River Plate; the audacious conquistador Francisco de Orellana journeys down the Amazon, Cabeza de Vaca walks from Florida to Mexico, Juan Vazquez Coronado pioneers into New Mexico and Hernando de Soto vainly pursues worldly riches in Florida, Mississippi and Georgia.

About all of these Hugh Thomas writes vividly, conveying the conquerors' almost disbelieving sense of what they were achieving. The discovery and subjugation of so many native peoples raised enormous controversy within Spain about how they should be treated, a debate Thomas explores perceptively, with an eye for resonances which lasted for centuries. Hugh Thomas brings alive one of the most extraordinary and influential moments in High Renaissance and world history.

Hugh Thomas is the author of, among other books, The Spanish Civil War (1961), which won the Somerset Maugham Award, The Suez Affair (1967), Cuba: The Pursuit of Freedom (1971), An Unfinished History of the World (1979), Conquest: Montezuma, Cortés and the Fall of Old Mexico (1994), The Slave Trade (1997) and the first volume of his Spanish Empire trilogy, Rivers of Gold (2003), which is reissued to coincide with publication of the second volume. From 1966 to 1976 he was Professor of History at the University of Reading. In 2008 he was made a Commandeur de L'Ordre des Arts et Lettres in France and in 2009 received the Calvo Serer Prize, The Boccacio Prize, and Nonino Prize in Italy. He was director of the Centre for Policy Studies in London from 1979 to 1991, and he became a life peer as Baron Thomas of Swynnerton in 1981.

1. The Golden Age: The Spanish Empire of Charles V

2. The Golden Age: The Spanish Empire of Charles V