Items related to Doctor Who: The Tomb Of The Cybermen (TV Soundtrack)

Davis, Gerry; Pedler, Kit Doctor Who: The Tomb Of The Cybermen (TV Soundtrack)

Doctor Who: The Tomb Of The Cybermen (TV Soundtrack) 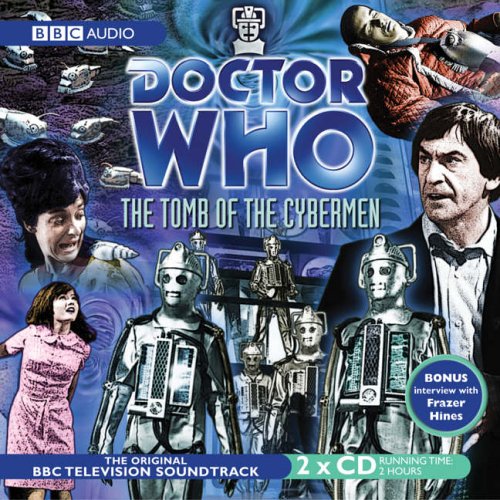 'You will be like us...' On the planet Telos, the Doctor and his friends encounter a party of archaeologists intent on uncovering the mythical tomb of the Cybermen. Only the Doctor seems aware of the folly of this venture, but suddenly it's too late - the ice tombs are open and the Cybermen are coming back to life...Trapped underground with the Cyber Controller and his acolytes, including the vermin-like Cybermats, the Doctor and company learn that they are to be turned into a new generation of Cybermen. To make matters worse, there is treachery and double-crossing amongst the humans. Can the Cyber menace be made dormant before it spreads out to the galaxy once again - and will the Doctor, Jamie and Victoria escape with their lives? Frazer Hines, who played Jamie in these four BBC TV episodes from 1967, provides linking narration for the story. In a bonus interview, he also recalls the making of The Tomb of the Cybermen. 2 CDs. 2 hrs.

Patrick Troughton faces the dreaded Cybermen in the digitally remastered soundtrack of a classic BBC TV story, with linking narration by Frazer Hines.

THE PROGRAMME: The action of The Tomb of the Cybermen follows directly on from that of the preceding serial The Evil of the Daleks, with the Doctor and Jamie welcoming the newly orphaned Victoria aboard the TARDIS. Commissioned as Doctor Who and the Cybermen Planet, this was the third encounter between the Doctor and his half-human, half-machine foes. It was co-written by Kit Pedler, who devised the Cybermen in The Tenth Planet, and Gerry Davis, the story editor who had helped develop them. The serial was also known as The Ice Tombs of Telos during development. The Tomb of the Cybermen was recorded immediately after Victoria's debut story, The Evil of the Daleks, and before the summer break in production. Early scenes on the surface of Telos were filmed at Gerrards Cross Sand & Ballast Company at Wapsey's Wood in Buckinghamshire on 12 June 1967. The serial benefited immensely from some impressive and atmospheric filming for action and effects sequence over the following week at the BBC Television Film Studios at Ealing. Here the full size tomb complex was built for the chilling sequence where the dormant Cybermen return to life. The bulk of the serial was then recorded from 1 to 22 July 1967 in Studio D of the BBC's Lime Grove premises. As with many episodes during this period of Doctor Who's history, The Tomb of the Cybermen did not have a music composer assigned to it. Instead, director Morris Barry worked closely with the sound department to create an atmospheric and evocative background of classic library tracks and Radiophonics, courtesy of Brian Hodgson and Dick Mills. Grams operator Laurie Taylor performed a technical tour-de-force playing this into the studio recordings, with the result that this story is particularly effective on audio. Of the music heard in the story, one particularly distinctive cue is Space Adventure by Martin Slavin, heard as the Cybermen return to life; this had already been associated with the creatures in their two previous appearances. The Tomb of the Cybermen launched the 1967/8 series of Doctor Who, promoted by a striking cover image of the metal menace facing the Doctor on the cover of the Radio Times. The serial was criticised for graphic violence, with Kit Pedler defending his script against concerned parents on the BBC1 feedback programme Talkback on 26 September. Ascribed a legendary status by the fans, the serial was believed lost for many years until a full print of the series was recovered from Hong Kong in 1992 and is currently available on DVD. After the closing credits rolled on Episode 4, BBC1 viewers were shown a short trailer for the next adventure in which two men, camped out on a mountainside, came under a vicious attack. A week later, the Doctor would still be in the cold, encountering The Abominable Snowmen... Programme notes compiled by Andrew Pixley and Mark Ayres.

Doctor Who: The Tomb Of The Cybermen (TV Soundtrack)

The Tomb of the Cybermen: TV Soundtrack