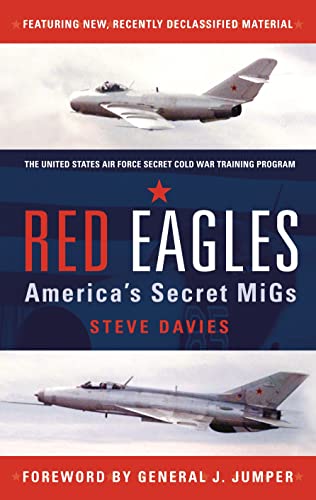 ..".the book benefits from recently declassified information. ...[The stories of] over 30 pilots and crewmen that participated in the unit ... makes [for] an interesting read." --Air Classics

"This is an engaging combination of an adventure story and a case study in military reform...Davies' major achievement is his demonstration of the Red Eagles' role in facilitating the USAF's development into a potent instrument of air supremacy that remains important even in the current era of antiterrorism." --Publishers Weekly (July 2008)

"Every once in a while, one runs across a book that simply sucks one into the story from page one until the end of the book. This is one of those ... So good is this book that if you buy only two or three aviation books a year, this one needs to be one of those." --Scott Van Aken, modelingmadness.com (October 2008)

"Davies' Red Eagles is a fitting tribute to [the pilots who died flying the Mi-Gs], and to all those who flew and supported the MiG training effort. His is a wonderful tale, superbly told, unveiling one of the last great unknown cold war stories." --Richard P Hallion, Air & Space (March 2009)

An essential book for all people interested in the Cold War and the top secret tactics used by the USAF to defeat their Cold War enemies.