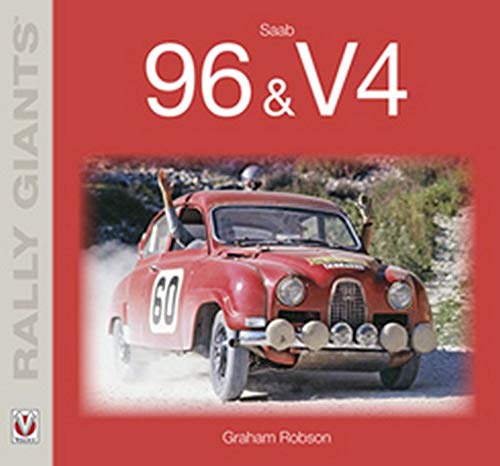 The front-wheel-drive Saab 96 made the brand into a rally icon in the 1960s. Superstar driving from Erik Carlsson, his wife Pat Moss-Carlsson and - later - from Stig Blomqvist, all brought real publicity and admiration for a car that always lacked the sheer straight-line performance of its rivals. Saabs like this, however, never wanted for strength, or for amazing handling and traction, and they succeeded in events as diverse as the Monte Carlo, Britain's RAC rally, special stage events in every Scandinavian country, and the rough-and-tough Spa-Sofia-Liege Marathon. The big change came in 1967, when the 96 became the V4, looking almost the same as before, but with a new and more powerful four-stroke Ford-Germany V4 engine. Works cars continued to be competitive in carefully chosen events for many years, and it was only the arrival of much more specialised rivals that made them outdated. Saab, though, was not finished with rallying, as the V4's successors, the much larger and more powerful 99 and 99 Turbo types, proved. More than any other car of its era, the 96 and V4 models proved that front-wheel-drive allied to true superstar driving could produce victory where no-one expected it.

"As well as a fully detailed history of both the 96 and V4's rally career, this title, from the Rally Giants series, includes a complete listing of important successes, rival comparisons, plus detailed profiles of the principal people involved in racing and producing these plucky Saabs. A great read! Classic Car Buyer

"There's plenty of gen on the characterful Trollhattan saloons and those that made them great." Octane
"The campaign stories are illustrated with plenty of action photography and the work is worthy of a place on any Saab or rally enthusiast's bookshelf." Classic Cars"

"Graham Robson is to be congratulated on an excellent publication this book is definitely one for every Saab enthusiast's bookshelf." Saab Driver
"This book features excellent photos throughout, an entertaining text and some wonderful anecdotes it's a very worthy addition to your rallying library." New Zealand Classic Car" About the Author:

Graham Robson possesses a world-wide reputation as a motoring historian, and has been close to the sport of rallying for many years. Not only as a competitor, team manager, organiser, reporter, commentator and observer, but above all as an enthusiastic historian, in more than forty years he has never lost touch with the sport. His experience of rallying is worldwide. Not only has he competed in many British and European events, but reported on marathons in South America, and acted as a travelling controller in the legendary London-Mexico World Cup rally. As a recognised authority on many aspects of classic cars and motoring of that period, he is the most prolific of all authors, with more than 120 published books to his credit. Over the years he has owned, driven, described and competed in many of the cars featured in this Landmark Rally Cars series, and his insight into their merits is unmatched.