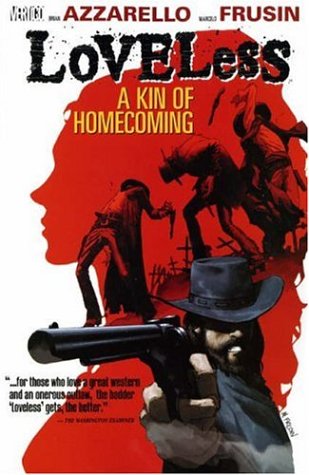 Wes Cutter's coming home from the Civil War...as part of the losing side. His estate has been repossessed by Union soldiers; his wife is missing, presumed dead; and for a group of Confederate die-hards up in the mountains, the war hasn't ended yet. But what secrets is Cutter hiding alongside the dynamite in his saddlebags? Who is the mysterious companion riding with him? Why is his own brother proclaiming him dead? And exactly which side is Cutter on - Confederate, Union...or his own? From acclaimed, bestselling author Brian Azzarello ("100 Bullets", "Batman: Broken City") and artist Marcelo Frusin (Hellblazer) comes a hard-hitting Western in the tradition of Deadwood and Unforgiven!

Brian Azzarello's work on 100 Bullets and Jonny Double, as well as Batman, Hellblazer, and Lex Luthor: Man of Steel has catapulted him to the forefront of the ranks of contemporary comics writers, winning him several Eisner awards. Marcelo Frusin is a skillful new penciller whose previous work includes Magnus Robot Fighter, Weird War Tales and Flinch. He is the regular artist for both Loveless and Hellblazer.

Book Description Paperback. Condition: Very Good. The book has been read, but is in excellent condition. Pages are intact and not marred by notes or highlighting. The spine remains undamaged. Seller Inventory # GOR002506191

Book Description Paperback. Condition: Fair. A readable copy of the book which may include some defects such as highlighting and notes. Cover and pages may be creased and show discolouration. Seller Inventory # GOR010113077