Items related to "AC/DC": Maximum Rock and Roll - The Ultimate... 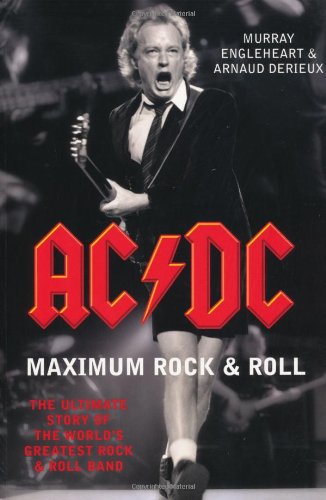 AC/DC are without doubt one of the world's very biggest bands - their appeal in blending the fierce energy and all-out guns-blazing attack of heavy metal to the bluesy groove and infectious boogie of the Stones. Their latest album, Black Ice, was one of the biggest CD sellers last Christmas. Their back catalogue - classic albums like Back in Black - still sells and sells. They sold out 4 nights at the massive O2 arena in ten minutes, and as a result return to the UK for stadium dates at Wembley and elsewhere this summer. This is both the first book on AC/DC for some years, and is already hailed as the best. Murray Engleheart covers their whole story through the death of founder member Bon Scott through the co-option of Geordie Brian Johnson on vocals, their humunguously popular albums like Highway to Hell and their hard-rocking, adrenalin-soaked live performances - to 2008's new Black Ice album and the first world tour for 8 years, when just about everyone had given up hope of seeing them play live again. AC/DC: Maximum Rock & Roll is published in original paperback to be in the shops in time for the band to be back in the UK playing epic shows in our biggest stadiums. Murray Engleheart is one of Australia's most respected music writers with a career that spans more than a quarter of a century. He is a noted authority on AC/DC and has interviewed the members of the band on numerous occasions.

"The most authoritative AC/DC book to date." -- Billboard (Australia)

"The most authoritative AC/DC book to date."--Billboard (Australia)

The most authoritative AC/DC book to date. --Billboard (Australia)"

The definitive biography ... this book is required reading for any serious fan of rock music. --Publishers Weekly (starred review)"

"The definitive biography ... this book is required reading for any serious fan of rock music."--Publishers Weekly (starred review)