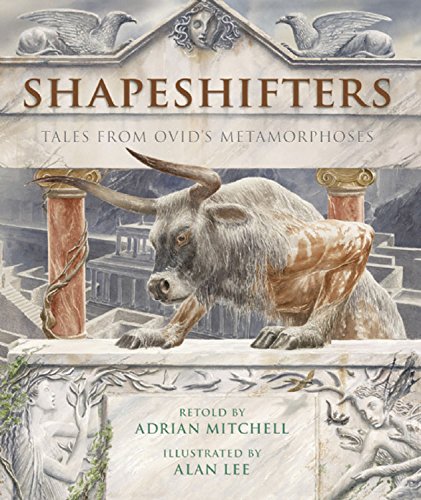 "Behold the great shapeshifter himself, boldly casting poetic spells." - Roger McGough "Adrian Mitchell makes these tales of human overreaching and natural vengeance sharply up to date. Children will be entranced, but there's plenty for adults too." - Andrew Marr Bursting into life in the hands of Adrian Mitchell, here are 30 of the brightest, loveliest and most powerful myths ever written - stories of gods such as Jove, Apollo, Juno, Venus and Mercury and of mortals such as Daphne, Narcissus, Adonis, Phaeton and Persephone . Re-created from Ovid's Metamorphoses in stories, ballads and headline news, they sing aloud on the page. Breathtaking artwork by the most acclaimed fantasy illustrator of our time transforms the stories into a living, breathing children's classic to bewitch a new generation raised in a world of special effects.

With Alan Lee's amazing illustrations and the late Adrian Mitchell's wonderful writing style, this book has all the ingredients of a life-long classic. Considered to have within its pages thirty of the most powerful and delightful myths ever written, this lovely production certainly does them justice. This a treasure of a book. --Bookseller

Tales from Ovid's Metamorphoses might seem inaccessible to today's iPod generation, but children raised on Harry Potter and Twilight take fantasy and myth in their stride. Mitchell's lyrical interpretation and Alan Lee's quite breathtaking illustration bring to life the heroics and tragedies of King Midas, Narcissus, Echo, Persephone and the Minotaur, among others. One for all the family. --Daily Mail

This book, Adrian Mitchell's last, is deeply felt and highly personal.In its vigour and its dramatic range it is a fitting memorial to a writer who added such a vibrant human note to literature for both children and adults. --Books for Keeps

ADRIAN MITCHELL (1932-2008) made a splash in the 1960s as the first journalist to interview the Beatles and caught the spirit of the time with his anti-war poem 'Tell me lies about Vietnam'. The author of over twenty stage plays including The Lion, the Witch and the Wardrobe, he adapted many foreign classics for the Royal Shakespeare Company and the National Theatre. He was the lyricist for Peter Brook's Us and Peter Hall's Animal Farm, and wrote many of the lyrics for Pam Gems' Piaf, as well as television documentaries and novels for adults and children. He gave over a thousand performances of his poems. His last three books were Shapeshifters, Tell Me Lies (Bloodaxe Books) and Umpteen Pockets (Orchard Books). Adrian's death in 2008 was a sad loss to literature, to the theatre and to children everywhere.

ALAN LEE won the Kate Greenaway Medal for his illustrations to Rosemary Sutcliff's Black Ships Before Troy, which was followed by The Wanderings of Odysseus (both Frances Lincoln). In 1998 he won the Best Artist Award at the World Fantasy Awards. He illustrated the Centenary editions of J.R.R. Tolkien's The Hobbit and The Lord of the Rings and, more recently, The Children of Húrin (HarperCollins). He went on to transform his vision of Middle Earth from page to celluloid in Peter Jackson's film trilogy The Lord of the Rings, winning an Oscar for Conceptual Design in 2004. Alan lives in south Devon.