Items related to I Said No Thanks: The Autobiography

Nacho Novo I Said No Thanks: The Autobiography

I Said No Thanks: The Autobiography 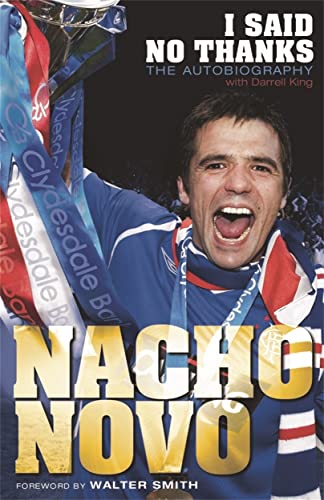 Nacho Novo is the most revered foreign player Rangers have had since iconic figures like Brian Laudrup and Jorg Albertz. He became an instant favourite with the Ibrox faithful in the summer of 2004 when he rejected overtures from arch-rivals Celtic and signed for Rangers. Now, as he closes in on six years at Rangers, the striker tells his own story in an explosive and controversial book that pulls no punches. Novo charts his journey from his upbringing in Spain to the streets of Kirkcaldy and Dundee as he made his name in Scottish football. There's the family tragedy that changed his life. He reveals the real reasons he said 'No Thanks' to Celtic - a decision that defined his life. And he tells the full inside story of the managers he has worked with, the glory goals that have clinched SPL titles and UEFA Cup glory, the fall-outs and the controversy as well as revealing for the first time the shocking stories behind life in Glasgow as one of few players to have split the football-mad city in two. I Said No Thanks is a no-holds-barred insight into life as an Old Firm star.

Nacho Novo is one of Rangers' most popular and respected players. Born in Spain in 1979, he started his footballing career at SD Huesca before he moved to Scotland in 2001 to play for Raith Rovers and Dundee before signing with Rangers in 2004. Darrell King is a sports writer with The Evening Times and a member of Radio Clyde's SuperScoreboard team.

1. I Said No Thanks: The Autobiography

2. I Said No Thanks: The Autobiography [Hardcover] Nacho Novo