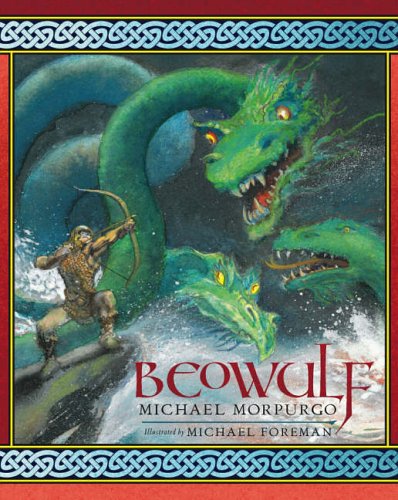 In fifth-century Denmark, a murderous monster stalks the night, and only the great prince of the Geats has the strength and courage to defeat him. Beowulf's terrifying quest to destroy Grendel, the foul fiend, a hideous sea-hag and a monstrous fire-dragon is the oldest surviving epic in British literature. Artfully retold and magnificently illustrated, Beowulf is made instantly accessible to children by the formidable children's book partnership of Michael Morpurgo and Michael Foreman.

"With Morpurgo's expert retelling and Foreman's masterly spreads... this is quite perfect as is the production." The Children's Bookseller on Sir Gawain and the Green Knight"

The epic Anglo-Saxon legend is brilliantly recreated by an award-winning author/illustrator team.

Book Description Hardback. Condition: Very Good. The book has been read, but is in excellent condition. Pages are intact and not marred by notes or highlighting. The spine remains undamaged. Seller Inventory # GOR002715648

Book Description Hardback. Condition: Fair. A readable copy of the book which may include some defects such as highlighting and notes. Cover and pages may be creased and show discolouration. Seller Inventory # GOR004067965

Book Description Hardcover. Condition: Very Good. Very Good: a copy that has been read, but is in excellent condition. Pages are intact and not marred by notes or highlighting. The spine remains undamaged. Most items will be dispatched the same or the next working day. Seller Inventory # wbb0018419422