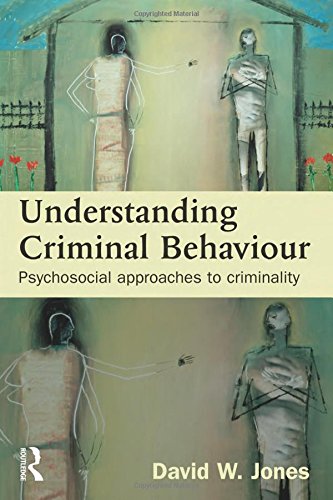 Our understanding of criminal behaviour and its causes has been too long damaged by the failure to integrate fully the emotional, psychological, social and cultural influences on the way people behave.

This book aims to integrate psychological and criminological perspectives in order to better understand the nature of criminal behaviour. In particular it aims to explore the range of psychological approaches that seek to understand the significance of the emotions that surround criminal behaviour, allowing for an exploration of individual differences and social and cultural issues which help to bridge the gaps between disciplinary approaches.

The book puts forward a model for understanding behaviour through a better grasp of the link between emotions, morality and culture and argues that crime can often be viewed as emerging from disordered social relationships.

'Understanding Criminal Behaviour's strap line should be 'the holy grail' as it promises a whole new level of understanding of criminal behaviour. Probably once in a professional career is a paradigm shift of this significance ever proposed, and several conditions have to be right for this to happen...David Jones proposes an eclectic psychological approach to understanding the nature of criminal behaviour that promises to integrate criminological and clincal perspercitves into a holistic theory.' – Monica Lloyd, Forensic Psychologist, NOMS, in Probation Journal

'Jones breaks new ground in integrating psychological perspectives into the mainstream of criminological theory. He makes a compelling case that by emphasizing a psychosocial outlook as opposed to the traditional psychological approach, scholars may more effectively analyze criminality. . . . Jones presents a well conceived, timely, and well packaged work that begins to build a bridge between adversarial approaches. Highly recommended.' –  F.E Knowles in CHOICE

'This is a timely book given the growth of psychosocial studies and the increasing political and cultural focus on criminality. Jonesâ€™s book is both comprehensive and detailed in its outline of explanations of criminal behaviour, and Jones gives a convincing account of why psychological research has been increasingly omitted from criminological topics.'  –  Amanda Holt in The Psychologist,

' . . . Jones succeeds admirably in his goal to present "a constructive view of how psychology already does contribute, but might have more to contribute, to the debate about the problem of crime" (pxx) . . . Anyone working in the criminological field knows that Jones is right about the depth of division that currently exists between psychology and sociology. To those who are as bored as I am with these pointless and destructive theory wars, Jones' book is a refreshing tonic.' –  Richard Wortley, International Criminal Justice Review

'I would recommend Jones' book to those who [do not have a first degree in criminology] as a critical, wide-ranging introduction. And there is much in the text to remind non-neophytes of aspects they may well have forgotten....'
-Herschel Prins, University of Leicester in The Journal of Forensic Psychiatry & Psychology, vol 21 no 6

This book presents an integration of psychological perspectives on criminal behaviour with mainstream criminological concerns. As criminology developed through the 20th century psychological perspectives became rather marginal. In part this arose due to academic psychology's commitment to experimental methods which have not been easily applied to the real world of crime, alongside many criminologists' aversion to many psychological theories that seemed to pathologise offenders and did not explore the social and cultural circumstances that surrounded those individuals.This book offers a psychosocial perspective on crime and argues that a great deal can be gained by re-integrating psychological approaches with the more sociological perspectives of criminology. In particular the book explores psychological approaches that seek to understand the significance of the emotions that surround criminal behaviour. The study of emotions allows for integration of individual differences with cultural issues which is helpful at bridging the gaps between disciplinary approaches.