Items related to Death of a River Guide

Death of a River Guide 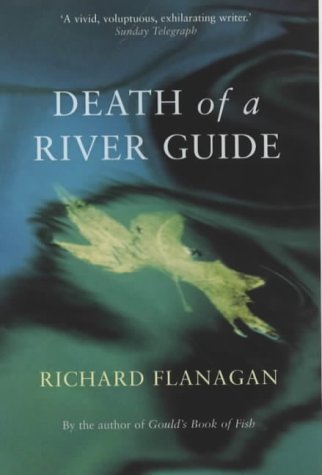 Beneath a waterfall on the Franklin, Aljaz Cosini, river guide, lies drowning. Beset by visions at once horrible and fabulous, he relives not just his own life but that of his family and forebears. In the rainforest waters that rush over him he sees those lives stripped bare of their surface realities, and finds a world where dreaming reasserts its power over thinking. As the river rises his visions grow more turbulent, and in the flood of the past Aljaz discovers the soul of his country.

This first novel combines the narrative ingenuity of Golding's Pincher Martin with the imaginative detail of De Bernieres' Captain Corelli. It's a torrent of a book - take the plunge Source: Independent

Death of a River Guide defies superlatives. It is that rare commodity - a wonderful fiction which has pace, depth of feeling, and infinite imaginative possibilities Source: Scotland on Sunday

One of the most auspicious debuts in Australian writing Source: TLS

Richard Flanagan's first novel could well become a classic, doing for Tasmania what Gabriel Garcia Márquez did for Colombia or William Faulkner did for Mississippi Source: Mercury (Tasmania)

Richard Flanagan is the author of three novels which have all been published to international acclaim: Death of a River Guide, The Sound of One Hand Clapping and Gould's Book of Fish. His latest novel The Narrow Road to the Deep North won the Man Booker Prize 2014. He lives with his family in West Hobart, Tasmania.