Items related to Kafka on the Shore

Kafka on the Shore 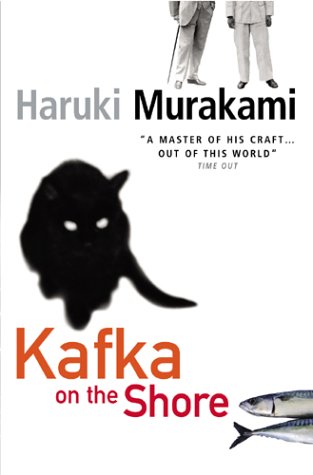 "A stunning work of art," the New York Observer wrote of The Wind-Up Bird Chronicle, "that bears no comparisons," and this is also true of this magnificent new novel, which is every bit as ambitious, expansive and bewitching. A tour-de-force of metaphysical reality, Kafka on the Shore is powered by two remarkable characters. At fifteen, Kafka Tamura runs away from home, either to escape a gruesome oedipal prophecy or to search for his long-missing mother and sister. And the aging Nakata, who never recovered from a wartime affliction, finds his highly simplified life suddenly upset. Their odyssey, as mysterious to us as it is to them, is enriched throughout by vivid accomplices and mesmerizing events. Cats and people carry on conversations, a ghostlike pimp employs a Hegel-quoting prostitute, a forest harbors soldiers apparently unaged since World War II, and rainstorms of fish fall from the sky. There is a brutal murder, with the identity of both victim and perpetrator a riddle. Yet this, like everything else, is eventually answered, just as the entwined destinies of Kafka and Nakata are gradually revealed, with one escaping his fate entirely and the other given a fresh start on his own.

"If you've never immersed yourself in the wonderful world of cult Japanese writer Haruki Murakami you're in for a treat...This novel's central story of a teenage runaway and an ageing man surrounded by bizarre dramas, is as compelling as its predecessors. Magnificent stuff." (Red Magazine)

"Murakami's tenth novel is as nutty, funny and silly as any of those that have come before it... Philip Gabriel's translation is carefully done and Murakami's prose is all the richer - and pleasantly weirder - for the translator's fidelity to it." (The Times)

"What a magnificently bewildering achievement Kafka on the Shore is. Brilliantly conceived, bold in its surreal scope, sexy, and driven by a snappy and often comical plot, Murakami's new work delves into the congested inner workings of our selves with characteristic brio." (The Independent)

"Kafka on the Shore is an ambitious and substantial new novel... The plot, wild as it is, doesn't waste any material, satisfyingly tightening the screw to the end. In short, this is a book which works in the most expert way." (The Spectator)

The most unusual and mesmerising novel yet from Japanese cult author, Haruki Murakami

1. Kafka on the Shore

2. Kafka on the Shore

3. Kafka on the Shore

4. Kafka on the Shore