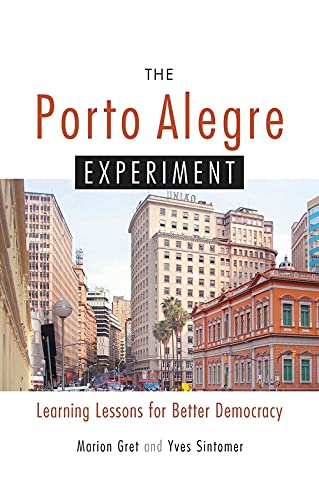 What relevance can a middle-sized Brazilian city possibly have for the rest of the world? This book provides the answer. We live in an age where there is more and more disillusion with periodically trooping to the polls, voting with the party herd, and supporting politicians who, once in office, act contrary to the promises they made on the hustings. The practice of representative democracy, in short, does not command much confidence. In the US, elections are dominated by big money. In developing countries, structural adjustment and neoliberal economics compel governments to ignore the demands of ordinary people for services like health and education. This is where the participative budgetmaking experiment in Porto Alegre comes in. Over the past decade, this city has institutionalized the direct involvement, locality by locality, of ordinary citizens in deciding spending priorities. This book gives a down to earth description of how this democratic innovation works in practice. It explores the difficult questions. Can inhabitants taking part in public management really strengthen its efficiency? Is genuine participation possible without small groups monopolizing power? Can local organizations avoid becoming bureaucratized and cut off from their roots? Can neighbourhood mobilization go beyond parochialism and act in the general interest? The authors also raise the bigger question about what are the lessons to be learned from Porto Alegre for a renewal of democratic institutions elsewhere in the world. This is why this illuminating and independent-minded investigation will of use to scholars, politicians and those campaigning for a deepening of democratic institutions worldwide.

Representative democracy is no longer the agency of popular will. In the US, elections are controlled by big money. In developing countries, the undemocratic imposition of neo-liberal economic policies has forced governments to dismantle basic services like health and education. But Porto Alegre presents an apparent alternative. Through its experiment in participative budgetmaking over the past decade, this city has institutionalised the direct democratic involvement of ordinary citizens in deciding spending priorities. The Porto Alegre Experiment asks the difficult questions. Can local participation in public management really strengthen its efficiency? Is genuine participation possible without small groups monopolising power? Can local organizations avoid becoming bureaucratised and cut off from their roots? Can neighbourhood mobilisation go beyond parochialism and act in the general interest? It also raises the bigger question about the lessons to be learned from Porto Alegre to renew democratic institutions elsewhere in the world.

Yves Sintomer divides his time between the University of Paris VIII and the Marc Bloch Centre in Berlin, where he is a researcher. He is the author of La democratie impossible? Politique et modernite chez Weber et Habermas (1999).

2. The Porto Alegre Experiment: Learning Lessons for a Better Democracy