Items related to The History of Development: From Western Origins to...

The History of Development: From Western Origins to Global Faith (Development Essentials) 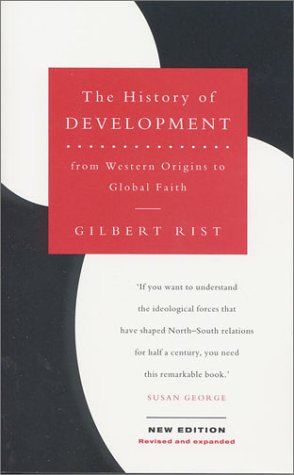 For years we have believed in development. Indeed, with all its hopes of a more just and materially prosperous world, development has fascinated societies in both North and South. Looking at this collective fancy in retrospect, Gilbert Rist shows the underlying similarities of its various theories and strategies, and their shared inability to transform the world. He argues persuasively that development has always been a kind of collective delusion which in reality has simply promoted a widening of market relations despite the good intentions of its advocates. Now this era is over. Globalisation has taken over. Former development promises have been shelved and replaced by a new but narrower slogan, 'the struggle against poverty'. Yet in spite of the failures of development, aggravated now by globalisation, we are told that growth -- which nobody would risk abandoning -- is still the only means of salvation. It is clear that the need for belief is stronger than any doubts about its actual wisdom. What, then, are the origins of this naive faith? Why have people put so much energy into proclaiming it and seeking to make it a reality? Why has it proved an illusion, and what future does it now have? These are some of the questions which this thoughtful and penetrating history of the concept of development explores. This book is an invitation to rethink contemporary problems and to prepare ourselves for what might be called the post-development era.

'If you want to understand the ideological forces that have shaped North-South relations for half a century, you need this remarkable book.' Susan George 'At a time when globalization and humanitarian interventions are taking over from development, this book should help us understand why development has led so many well-intentioned people astray?. It presents complex debates with great clarity, provides an excellent opportunity to get acquainted with the literature and should prove essential reading for students and others interested, or involved, in development.' Marie-Dominique Perrot, IUED 'There is no comparable book available in English.' Professor Martin O'Connor, economist 'Compelling and exciting reading?. Rist's book, written with deliciously mild irony, is an account of the most crucial moments in which the rites of a belief embraced by millions were elaborated and canonized.' Olga Nieuwenhuys, European Journal of Development Research 'A much needed corrective to the work of the cheerleaders of the newly globalized order?. This book does an outstanding job.' Jan Knippers Black, Journal of Developing Areas 'An excellent and challenging book?. It should be required reading for all interested in development, and particularly the economists among them.' Peter de Valk, International Journal of African Historical Studies 'This book is one of the most astute of its genre available today?. [It] is exact in its scholarship and profound in its clear account of the philosophies and consequences of the Western example.' Rapport

Gilbert Rist has for many years been a leading Swiss scholar of development. Before joining the staff of the Graduate Institute of Development Studies (IUED) in Geneva, where he has been a professor since 1986, he first taught in Tunisia and then spent several years as Director of the Centre Europe-Tiers Monde. One of his principal intellectual interests has been to construct an anthology of modernity in which he sees Western society as being every bit as traditional and indeed exotic as any other. Professor Rist is the author of a number of intellectually pathbreaking books highly critical of conventional thinking in the field. These include: Il etait une fois le developpement (with Fabrizio Sabelli et al.), Editions d'En Bas, Lausanne, 1986. Le Nord perdu: Reperes pour l'apres-developpement (with Majid Rahnema and Gustavo Esteva), Editions d'En Bas, Lausanne, 1992. La mythologie programmee: L'economie des croyances dans la societe moderne (with Marie-Dominique Perrot and Fabrizio Sabelli), PUF, Paris, 1992. La culture, otage du developpement? (ed.), l'Harmattan, Paris, 1994. La mondialisation des anti-societes: Espaces reves et lieux communes (ed.), Les Nouveaux Cahiers de l'IUED, No. 6, IUED, Geneve; PUF, Paris, 1997. The present book is his first to be published in English. It has also been published: in French: Le developpement: Histoire d'une croyance occidentale, Presse de Sciences Po., Paris, 1996 (2nd edition, 2001). in Italian: Lo Sviluppo: Sotira di una credenza occidentale, Bollati Boringhieri, Torino, 1997. in Spanish: El desarrollo: Una ideologia del siglo XX, Los Libros de la Catarata, Madrid, 2002.

1. The History of Development

2. The History of Development

3. The History of Development: From Western Origins to Global Faith (New Edition)

Book Description Condition: New. Brand New Original US Edition.We Ship to PO BOX Address also. EXPEDITED shipping option also available for faster delivery.This item may ship fro the US or other locations in India depending on your location and availability. Seller Inventory # AUDUU-50168

4. The History of Development: From Western Origins to Global Faith

5. The History of Development: From Western Origins to Global Faith

6. THE HISTORY OF DEVELOPMENT: FROM

7. The History of Development: From Western Origins to Global Faith Rist, Gilbert