Items related to The Other Wind: The Sixth Book of Earthsea

Le Guin, Ursula The Other Wind: The Sixth Book of Earthsea

The Other Wind: The Sixth Book of Earthsea 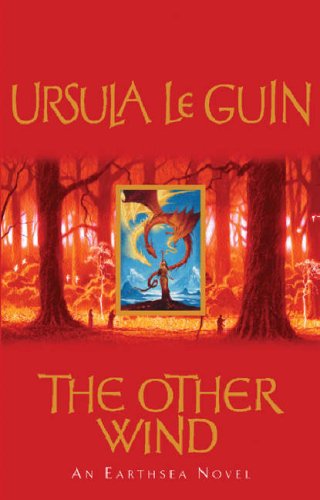 The wizard Alder comes from Roke to the island of Gont in search of the Archmage, Lord Sparrowhawk, once known as Ged. The man who was once the most powerful wizard in the Islands now lives with his wife Tenar and their adopted daughter Tehanu. Alder needs help: his beloved wife died and in his dreams she calls him to the land of the dead - and now the dead are haunting him, begging for release. He can no longer sleep, and the Wizards of Earthsea are worried.
But there is more at stake than the unquiet rest of one minor wizard: for the dragons of Earthsea have arisen, to reclaim the lands that were once theirs. Only Tehanu, herself daughter of a dragon, can talk to them; it may be that Alder¿s dreams hold the key to the salvation of Earthsea and all the peoples who live there.

In The Other Wind, Le Guin revisits some of the material for which she is most famous--the magical world of Earthsea, whose scattered islands are the home of an inventively conceived magic of checks and balances. Once before, in the fourth book Tehanu, with its hideously burned child who is part dragon, Le Guin reconsidered what she had already written, forcing her readers to abandon complacent enjoyment of the heroic in favour of something rather more straight-edge and critical.

Now, with hitherto friendly dragons burning humans out of their homes and the dead whispering ominously in a sorcerer's dreams, she questions her own premises even further. Ged, the burned-out magus of the first three books, and his wife Tenar are here, but peripheral; this is the tale of the tinker mage Alder and his dreams of his dead wife and how he finds himself caught up in the affairs of the great and good.

This is a calmer, more satisfying book than Tehanu; it is as if Le Guin is less angry with herself and her audience for the popularity of the first three books, more prepared to accept one sort of good and force us to move on from it to a more mature and ascetic vision. As always, she writes in a crisp, lyrical prose that approaches the sublime; this is a book about enlightenment that makes us believe it possible. --Roz Kaveney

"If you think you don't like fantasy, think again; Leguin's books simply give "reality" another shape." Erica Wagner -- The Times

"This absorbing philosophical debate can stand alone for Le Guin's new readers; for long-standing fans of the Earthsea saga, old friends are here." -- TES, May 31, 2002

'Le Guin's storytelling is remarkable...Without giving away the ending, it is both melancholy and affirming...moving and rewarding.' -- The School Librarian

'The characters and fantasy world are all vividly drawn and the fascinating issues raised by the story are important and profound.' -- Northern Echo

1. The Other Wind : An Earthsea Novel

3. The Other Wind : An Earthsea Novel