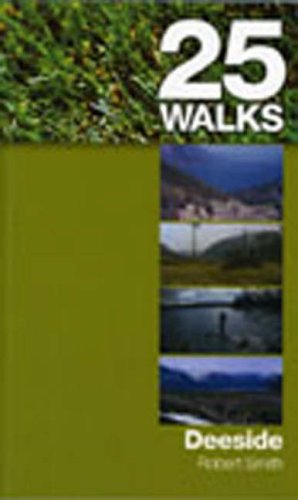 25 walks in the invigorating countryside by Banchory, Ballater and Braemar

The place that Queen Victoria declared to be a ‘dear Paradise’ when she came north to make Balmoral her Scottish home is described in this revised edition of a guide to walking in the area. Previously published by The Stationery Office, 25 Walks: Deeside is part of an established and popular series which currently comprises some 16 titles, covering areas of scenic beauty in Scotland, England and Northern Ireland.

Author Robert Smith is an experienced writer and hillwalker with an extensive knowledge of the area covered in this book and its history. According to him, Deeside is also a paradise for walkers: ‘It is a land of magnificent mountains and romantic glens, and it is also castle country, with a rich and colourful history. It gives you a taste of the wild places, but you don’t have to be a hardened hillwalker or Munro-bagger to enjoy it.’

Deeside describes 25 walks in the invigorating countryside between Banchory, Ballater and Braemar. The area is full of history and myth, and the walks visit many places of interest, including ancient cairns and stone monuments, drinking wells and a whisky distillery, tranquil lochs and glens. The walks, which range in length from 6 to 16 kilometres (4 to 10 miles), are well within the capability of anyone who is reasonably fit, and most are suitable for children.

Like the other books in the 25 Walks series, Deeside is both a practical guide and an attractive souvenir. The walks are clearly described and accompanied by easy-to-use maps and colour photographs.

Other titles in the 25 Walks series include: The Chilterns, The Cotswolds, Dumfries and Galloway, Edinburgh and Lothian, Fife, In and Around Belfast, In and Around Glasgow, In and Around London, Down District, The Scottish Borders, Skye & Kintail, The Trossachs, The Western Isles and The Yorkshire Dales.

Royal Deeside is a walker’s paradise—the ‘dear Paradise’ that Queen Victoria discovered when she came north last century to make Balmoral her Scottish home. It is a land of magnificent mountains and romantic glens, and it is also castle country, with a rich and colourful history. This book takes you on 25 Deeside walks, from Banchory near Aberdeen to Braemar and the edge of the Cairngorms.

It gives you a taste of the wild places, but you don’t have to be a hardened hillwalker or Munro-bagger to enjoy it. The walks are well within the capability of anyone who is reasonably fit, and most are suitable for children. They range in length from 6 to 16 kilometres (4 to 10 miles).

The weather in this part of Scotland, particularly as you get near to the hills, can be changeable, so you should go dressed for whatever Nature offers. Waterproofs are advised for all the walks just in case. For some of them strong walking shoes or hill boots are necessary. Information at the beginning of each walk gives advice on clothing and footwear,

Part of the pleasure of walking is in knowing about the countryside around you, its history, its flora and fauna, its myths and legends. This book takes you on the trail of the Haunted Stag, along a wooded track of the Warlock’s stone, and up by ‘lonely, lonely dark Loch Kander’. You will cross the Seven Brigs, and search for the Seven Wells.

If you have a dog make sure it is under control keep it on the lead in areas where there may be deer, grouse or other wildlife.

Deer stalking and grouse shooting take place over some of the bill areas covered in this book. These activities, as well as being essential for the good measurement of deer and grouse (and the heather on which the latter depend for food) provide both income and employment, and it is important to take due precaution during the shooting season.

The main period of activity is from mid-August to late October. During this period it is advisable to keep to the main paths and tracks so that minimum disturbance is caused. Further advice on areas where shooting and stalking takes place can be obtained from estate offices or tourist information centres.

Much of the area covered by the book is also covered by the East Grampian Deer Management Group, a voluntary grouping of estates. You will find their attractive and informative stone signs in a number of places. These signs include a map showing the preferred walking routes during the shooting season.

On all walks please respect the Country Code. Its most important provisions include carefully closing all gates behind you, being scrupulous about nor dropping litter, and avoiding unnecessary noise.—Robert Smith

REVIEWS: ‘A variety of walks for all the family in a handy pocketable size with colour pictures, maps and interesting notes on the routes.’—Sunday Post

‘Will appeal to keen walkers of all abilities.’—The Scots Magazine

Robert Smith is an experienced writer and hillwalker with an extensive knowledge of the area covered in this book and its history. A former editor of the Aberdeen Evening Express, he has written a number of books about Aberdeen and the Grampian Region.

Book Description Paperback. Condition: Good. The book has been read but remains in clean condition. All pages are intact and the cover is intact. Some minor wear to the spine. Seller Inventory # GOR004626593

Book Description Paperback. Condition: Very Good. The book has been read, but is in excellent condition. Pages are intact and not marred by notes or highlighting. The spine remains undamaged. Seller Inventory # GOR002586068