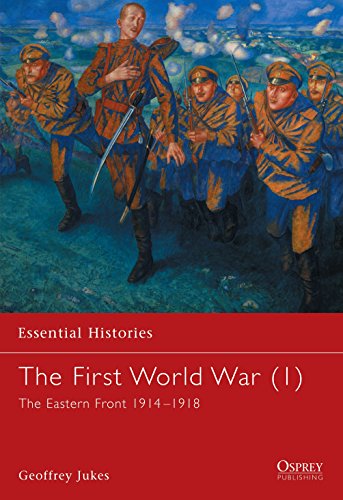 This book unravels the complicated and tragic events of the Eastern Front in the First World War. The author details Russia's sudden attack on German forces, despite her inadequate resources. A crushing defeat at Tannenberg was followed by Germany inflicting humiliation after humiliation on desperate Russian troops. For a while, those forces led by General Brusilov and facing Austria-Hungary fared better, but in the end this front too collapsed. Morale plummeted, the army began to disintegrate, and the Tsar was forced to abdicate - paving the way for the Bolshevik seizure of power in 1917.

In 1914 a series of complicated and tragic events saw Russia and Germany embark on a war that was to engulf the whole of Europe and be labelled by history as World War I. A tangle of international treaties that bound the major powers meant that, once started, widespread conflict was inevitable and on the largest and most costly scale yet seen by a modern Europe. For Russia, humiliated by defeat after defeat, the price was too high. Civic unrest forced the abdication of the Tsar and paved the way for the Bolsheviks to seize power. This is a concise guide to a complicated chapter in World War I history.

After leaving Oxford in 1953 Geoffrey Jukes spent 14 years in the UK Ministry of Defence and Foreign and Colonial Office, specialising in Russian/Soviet military history, strategy and arms control. From 1967 to 1993 he was also on the staff of the Australian National University. He has written five books and numerous articles on the Eastern Front in the two World Wars.

THE FIRST WORLD WAR: THE EASTERN

THE FIRST WORLD WAR: THE EASTERN